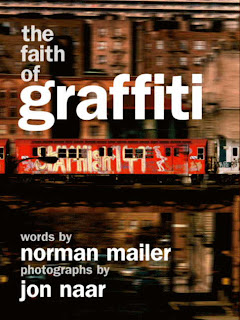 One of the subjects I omitted in last week's review of 1959 was the rebirth of Norman Mailer, from a writer of the fabled Great American Novel to a proponent of the writing style that falls under the umbrella term of "New Journalism." Fred Kaplan painted an understandably conflicting picture of Mailer, balancing the man's undeniable writing talents with a few missteps, some of which are just as embarrassing now as they were at the time. Mailer was fascinated by black culture, and was so enamored with the sounds of jazz music that he thought he could play the saxophone by spirit, not taking into account the actual learning and studies that go into improvisational music styles. Up until this week, I had never read any of Mailer's published works, and the following descriptions are based on the pictures painted by Mr. Kaplan. Socially, one of the many hats that Mailer seemed to wear was that of a white man who at best tried to show a wary, bigoted white society the artistic and social progress of the black community, and at worst that of a white man trying to make himself an honorary member of black society. While this might induce a lot of cringing today, one cannot deny that Mailer's attempt to straddle two personalities was revolutionary for that time.

This profile was fresh in my mind when I came across his 1974 profiles entitled The Faith Of Graffiti, a celebration of the art form that most of society (read: white urban) found either criminal, ugly, or both. The collection is dominated by the stunning photography of Jon Naar, with Mailer's words acting more as a highlight, a compliment to the hidden artists and the documentary photographer. Mailer conducted interviews with the pseudonym-labeled kids and with former New York City mayor John Lindsay. Interspersed with these interviews are thoughts on the artistic qualities of graffiti, both in contemporary form and in harmony with art history as a whole. Mailer's style in the five essays may or may not be a microcosm of his writing styles as a whole, but I found his passages to be both beautiful and problematic at the same time. 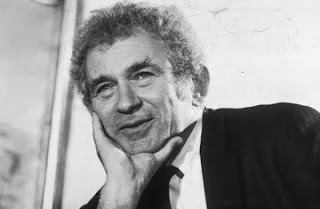 "But on reflection, was old A-I [Mailer's adopted tagger pseudonym, an abbreviation of Aesthetic Investigator] trying to slip in some sauce on the distribution of art down from the museums through media to the masses, smuggle over some old piety how the subway children may never have seen Memoria in Aeterum at the head of the stairs at M.O.M.A. but still had it filter through to them by way of Hofmann's imitators, and his uncredited influence on advertising artists working for layout? Fell crap! Rather say art begot art, and the migration's were no one's business (Mailer 18)."

The above passage is both a combination of Mailer's talents and shortcomings. He skillfully balances the artistic creations of the disadvantaged youths, and blends the urgency and thought-provoking natures of both their street works and the bold messages of the master painters found in museums across the world. However, there's the nagging feeling that Mailer is trying his hardest to appear "hip." This book was a landmark in showing graffiti as a social/artistic statement, but at the same time, it's hard to read the text and not feel that Mailer was subconsciously saying "I see the value in what you think is defacement." Then again, that might be too critical, seeing that the man went through many public mid-life crises, and the result was writing that wasn't as common then as it is now. This goes even further when Mailer describes a visit to interview Mayor Lindsay. His descriptions of the governor's mansion is somewhat overwrought, combining both meticulous details with a sort of atmospheric disdain of New York's upper echelons compared with the gritty reality of the ghettos. The below passage is a rambling run-on, leaving the reader both informed and utterly confused as to where exactly Mailer is going, story-wise.

"It is not a large lawn in front of the Mayor's residence nor even a large house and old white Gracie Mansion might be no exceptional residence on any wealthy road in Portland, Oregon or Portland, Maine--there is even a basketball hoop on a backyard not far from the front door, a political touch to date perhaps from recent years when the Knicks became the most consistently successful team in New York--yet with all its limited grandeur, Gracie Mansion is still one fine Federalist of a house (built in 1799), and if the spirit of an age could have been captured by a ratio, then where better to measure this magic mean....(Mailer 21)."

Perhaps intentionally, his interviews and descriptions of the taggers are much more satisfying and coherent.

"The windows are stained glass, sheets of red and yellow plastic pasted to the glass--the view must be on an air shaft. No light in this gray and late afternoon day. It is all the darkness of that gloom which sits in the very center of slum existence, that amalgam of worry and dread, heavy as buckets of oil, the true wages of the working class, with all that attendant fever in the attractions of crime, the grinding entrapments of having lost to the law...(Mailer 6-7)." 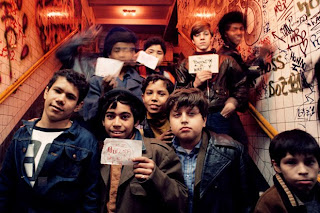 The true beauty of The Faith Of Graffiti comes in Jon Naar's photography, and the artwork itself. The photos capture graffiti in both everyday contexts as well as close-ups and in what are usually private moments--the actual acts of painting. While Mailer did his best to stress the vibrancy of the colors in the face of urban gray and monotony, Naar's photos highlight this in much more emotional fashion. According to Naar's afterword to the 2009 reprinting of the book, the photos were taken in December of 1972 and January of 1973. The photos look atmospherically cold, especially with the even sunlit winter skies appearing harsh. The image below is my favorite, since it shows a panoramic view of a neighborhood, in a quiet, seemingly midday lull, with the train slicing through the simplicity of the street and the above buildings. On the right-hand side, underneath the tracks, sits a man in a chair, and from what I can gather, he's the only person in the shot, or at least he's the only one truly visible. The photo seems to show him slouching in his seat and bored, a sobering small moment in an otherwise active photograph. 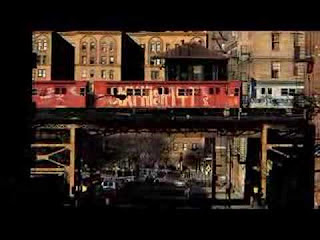 While Mailer's words are supposed to be the prime evocations of the photographs, I found that Naar's afterword was just as poetic, even if it was straightforward. Based on this small sample, he's not a writer like Mailer, but he sums up his artistic vision almost perfectly.

"I was impressed with how they used their graffiti as a private code to communicate with each other via the public transit system and the other means throughout Manhattan, the Bronx, Brooklyn, and Queens....my original intent [was] to show the spirit of a time and a place gone by celebrating the adventuresome young writers who made the graffiti, and this very book, possible."