"[Arcade Fire] has become inextricably linked to bombast and epic feats of rock heroism since releasing their debut, Funeral, qualities that have turned just as many people away from their subtlety-free sound as easily as they have attracted hundreds of thousands of fans. But after ramping up the drama further on 2007's Neon Bible, the band, with two ambitious and well-crafted under their belts, veered close to being crushed under the weight of their own ostentation." --Jeff Terich, in his review of Arcade Fire's The Suburbs for Treblezine. 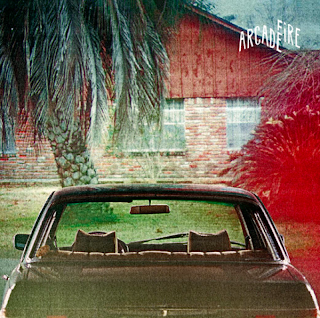 After reading Jeff Terich's review of the latest Arcade Fire release, I was struck by two things, but pleasantly surprised by both. One, after years of hearing the cliche of "sophomore slump" bandied about in sports, literature, music, and film, it's almost refreshing that someone has gone a bit further and highlighted the very real possibility of a "third-year slump" (would the correct term be a "junior slump?"). Funeral threw Arcade Fire onto the scene back in 2005, and I remember the sheer exuberance and word-of-mouth excitement that never seemed to die down. After the release of Neon Bible, with its more abstract philosophies, there was still no doubt that the band from Montreal was one of the best around; even if their debut album was their only released work, that sentiment would still be true. The second part of the review that never crossed my mind was the possibility of the band simply not being able to reach their own lofty, echoing anthems. I looked forward to The Suburbs with excitement, but in that rush, never thought that there was the potential for disappointment. Instead, I was struck by a vastly different sound, but songs that still retain intense heights, but in different packaging. It also goes without saying that I've never been privy to the idea of anyone being turned off by the band. Perhaps I haven't read that many reviews of their previous two works, but I've never heard any serious criticisms.

"The Suburbs," the album's opening track, is an almost shocking departure from the band's normal sounds; it begins happily, quietly, but the lyrics, sung perfectly by Win Butler, set the stage for the rest of the album. The idea of suburban angst has been expressed countless times by everyone from Green Day to Richard Yates. However, the "setting" is merely that, a setting for more complex musings on the desire for change and the onset of complacency. The songs combines such opposite statements as "You always seemed so sure/that one day we'd be fighting in a suburban war" and "So can you understand why I want a daughter while I'm still young?" There are two sides to every feeling, and it's established early that both will be expressed throughout the album.

My favorite track, "Ready To Start," is closer to their more rock-heavy past, as evidenced by their Madison Square Garden performance, directed by Terry Gilliam. However, even with more intense instrumentals, the lyrics dominate. That's not to say that Butler hasn't always been a gifted songwriter, but The Suburbs scales back the theatrics to make the messages more clear.

"All the kids have always known/that the emperor wears no clothes/but they bow down to him anyway/'cause it's better than being alone."

Kids and children are recurring motifs on the album, and yet again, these mentions provide a yearning for previous innocence, youthful rebellion, and a myriad of those ideas blended, standing alone, or dissected. The track "City With No Children" takes a step forward, observing the lack of happiness from an outsider's view, and the haunting lament of "I feel like I've been living/in a city with no children in it/a garden left for ruin by a millionaire inside a private prison" makes the listener want to cry as well as take in the sheer number of metaphors. For an album that's supposed to be less showy, there's never a passive moment. 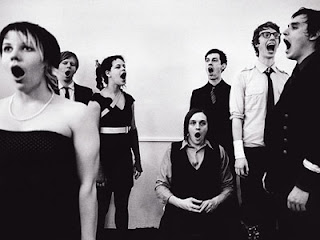 Régine Chassagne is just as powerful a vocalist as her husband, and if I had to give any "complaints" about the disc, it would be that she could have stood to be featured a bit more. Unlike other bands, even though Butler tends to handle the bulk of the singing, there's never a doubt that it's a collaborative effort from every musician; his words are just a part of a larger canvas. However, Chassagne gets an excellent outlet towards the end, with a beautiful rendering of "Sprawl II (Mountains Beyond Mountains)," a song that keeps the album's themes going, but offers a different aesthetic take with a new voice. She's not the best female vocalist ever, but it's amazing what a strong lyric and passion can supplement. It would be too easy to fall back on the notion that "less is more," but really, "The Suburbs" is an excellent example of that idea, that by scaling back the anthem-like intensities, Arcade Fire gets their messages across just as much, if not more, than they've always done.

To quote Mr. Terich again: "Yet in spite of its hugeness, it's not an album that overwhelms or bludgeons the listener with spectacle. In fact, it may even take a few listens before its blend of folk-rock, post-punk and gorgeous synth work truly clicks." The hugeness that he references is literally about the album's length (it's easily their longest-running album so far), but it can also be taken further. The hugeness is in the lyrics, not the music. However, the music does tend to be reminiscent of those varying genres. There are so many little moments that appear within the bigger picture, and "The Suburbs," with all of its possibly implied tips of the cap to folk and post-punk, can leave the listener almost dazed, but with plenty of ideas spinning. And, a rarity in any form of media, it's a careful blend of both ingenuity and sheer entertainment.
at August 21, 2010