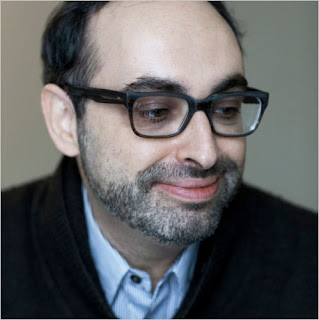 I've been thoroughly enjoying, as well as looking forward to, the second half of 2010, and the many notable book titles that have been released. From David Mitchell's The Thousand Autumns of Jacob De Zoet to next week's highly anticipated release of Freedom by Jonathan Franzen, writers both established and new are getting a lot of attention. The year is also a testament to the timing and power of The New Yorker's list of the twenty best writers under the age of forty; I've been enjoying the recently published short stories by the likes of Karen Russell and Joshua Ferris. A writer who fits both of these groupings (a major 2010 release and placement on said list) is one whom I've been meaning to read for quite some time, but have sadly never gotten to, until now. Gary Shteyngart has been receiving major acclaim for his latest novel, Super Sad True Love Story. I recently finished reading this latest work, thus continuing an unintentional trend of reading certain writers' bibliographies in less-than-chronological order.

Super Sad True Love Story is set in the near future, in an America beset by violence, in debt to China, and in an increasingly devastating war in Venezuela. The yuan is replacing the dollar, and dependency on "äppäräts," small, pebble-like internet devices, is the norm, along with a vast social network called GlobalTeens. While working in Italy for his company, Post-Human Services (a company that promises to give clients immortal life and youth), Lenny Abramov meets a young Korean-American woman named Eunice Park. He's older, balding and hopelessly smitten; she's young, brash, and hopelessly mean to him. However, their shaky connection is formed, and they end up living together in New York. He's attempting to gain respect at work, all while constantly fearing death, continuing to read books (or, as they're called in his time, Media Artifacts), and doing whatever he can to placate Eunice. She does her best to change Lenny, to make him more "hip" and respectable, but is beset by crippling self-esteem issues, attracting the wrong men, and dealing with her unloving, violent father and god-fearing mother. As America cracks around them, their relationship evolves, both for the best and for the worst.

The novel is composed in both "old" and "new" fashions. It's narrated by Lenny's hand-written diary entries, as well as Eunice's e-mails and instant messages. Lenny is extremely intelligent and book-smart, occasionally coming across like an unintentionally funny Woody Allen. He fully understands that Eunice is mean to him, but he cannot help but be in love with her.

"Dear Diary,
I learned how to say 'elephant' in Korean this week.
We went to the Bronx Zoo, because Noah Weinberg said on his stream that the ARA [American Restoration Authority] was going to close the place down and ship all the animals to Saudi Arabia 'to die of heatstroke.' I never know which part of Noah's streams to believe, but, the way we live now, you can never be too sure. We had fun with the monkeys and 'Jose the Beaver' and all the smaller animals, but the highlight was this beautiful savannah elephant named Sammy. When we ambled up to his humble enclosure, Eunice grabbed my nose and said, 'Kokiri.' 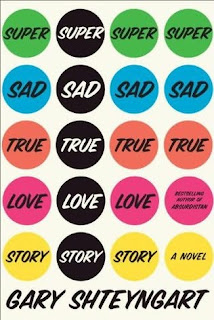 Super Sad True Love Story has been referred to as a satire in most of the early reviews, and I suppose that's an apt designation. Of course, if most good comedy is based in truth, then the idea of satire becomes much more relevant. The future America that Shteyngart creates feels both contemporary as well as not terribly far-fetched. Globalteens is presented as a hilarious child of both Facebook and Twitter, with 'teening' someone being the latest verb, not unlike 'tweeting' or 'friending.' The hilarious dystopia is also a wealth of soundbites and catchphrases. Globalteens offers friendly advice: "GLOBALTEENS SUPER HINT: Switch to images today! Less words=more fun!!!" The American landscape is awash with advertisements, including a wonderful phrase that is both subtle as well as hilariously urgent: "Together we'll surprise the world!" However, Shteyngart is able to move briskly between lampooning today's world and offering stark hints to violence.

"The first-class cabin disembarked with great haste. We ran down the stairs and onto the cracked JFK runway, which shuddered beneath the armadas of armored personnel carriers and roving packs of luggage carts. The summer heat stroked my wet back and made me feel as if a fire had just been put out all over my body. I took out my U.S. passport and held it in my hand, fingering its embossed golden eagle, still hoping it meant something. I remember how my parents would talk about the luck of their having left the Soviet Union for America. Oh God, I thought, let there still be such luck in this new world.
'Please wait underneath the "security shed,'" one of the stewardesses sobbed to us. We walked toward a strange outcropping, amidst a landscape of forlorn, aging terminals heaped atop one another like the vista of some gray Lagos slum (Shteyngart 42)."

Despite its futuristic tone, the novel fits perfectly into both postmodern literature as well as the increasingly debated category of the social novel. A few years back, Jonathan Franzen expressed concern about attempting to write about a world that can change drastically between the writing of a story and the publication of it. Shteyngart is fully aware of this; therefore, this "futuristic" work has its basis in today's world. Yes, most of the descriptions are fanciful, but the genius lies in the expression of issues that will always remain, no matter what the national/political landscape or the shape of the devices that we hold. Everyone will always fret about their body image, everyone will have strained issues with their families, and everyone will continue to strive for true love. Throughout the novel, Eunice receives e-mails from her mother. The messages are heartbreaking, but also a terrific example of old-world family issues combined with technology.

Eunhee,
We terrible worry right now because it sound like bad political situation in Manhattan. You should move back to Fort Lee and be family. This is more important than study for LSAT even. Remember we are old people and we see history. Daddy and I live through bad time in Korea when many people die on street, student young people like you and Sally [Eunice's sister]. Make sure you no political. Make sure Sally no political. Some time she talk. We want come see you Tuesday coming up. Reverend Suk he was teacher to our Reverend Cho bring his special sinners crusade to madison square garden from Korea and we think all family should go and pray...(Shteyngart 169)."

Shteyngart's writings on political upheaval and family strife has warranted comparisons to classic Russian literature (Mr. Shteyngart was born in Leningrad before emigrating to the United States as a child). With this in mind, the hypothesis can be made that Super Sad True Love Story spans three distinct eras, with its nods to the classics (Lenny and Eunice have even been referred to as a contemporary Romeo and Juliet), the current world and its technologies, and the not-too-distant future. The beauty of his writing is that nothing is written to be too outlandish, moving the novel into science fiction territory. The relationship between Lenny and Eunice (as well as their relationships to their own parents) can be cringe-inducing, and the violence and imagined future are, to be frank, scary as hell. But really, given today's economic and political landscape, is Shytengart being THAT fictional? Time will tell, but in the meantime, we have a terrific novel from an energetic, talented voice. From early reviews, Franzen's upcoming novel spans from the 1970s to the present time. After Mitchell's foray into the 18th century, and Shteyngart's look at the future, it's clear that important, contemporary literature is at home in a dizzying array of genres.