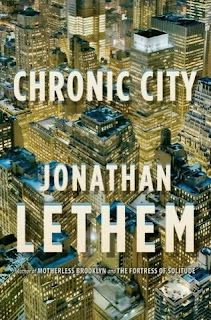 Back in June, I wrote a brief write-up of the Jonathan Lethem short story "Ava's Apartment," which was a combination of scenes from his latest novel, Chronic City. Looking back on that early review, I now find my bombastic praise and hyperbole a little embarrassing, but a few of my assertions hold true. Lethem is still among my favorite writers, even though I've added only one more of his books to my readings. As I read Chronic City, I was anxious to see how "Ava's Apartment" fit into the longer work. In spite of my enthusiasm, a small voice in the back of my head still expressed some trepidation about New York being a setting for another novel, seeing that it's been used hundreds of times in both great and mediocre hands. However, Lethem's 2003 novel The Fortress of Solitude used Brooklyn as its backdrop with evocative and wondrous effect. Since his latest work has been available since October, these past few months have revealed that critics are amazingly divided. Depending on whom you ask, Chronic City is either the best or the worst entry into Lethem's bibliography.

The novel is both straightforward, yet wildly complex, with a few characters dealing with a myriad of events, lives, and experiences. Chase Insteadman is a former child sitcom star living off of royalties, engaged to Janice Trumbull, an astronaut living in a doomed space station, her love letters to Chase being popular readings in New York's tabloid magazines. Chase meets the acquaintance of Perkus Tooth, a migraine-plagued former music critic whose life revolves around heavy marijuana use, conspiracy theories, and a burger joint. Richard Abneg is a relatively prominent city official who's somewhat wary of his new acquaintances yet cannot help but get caught up in their obsessions and unravelings. His lover, Georgina Hawkmanaji, is a wealthy socialite who, at first glance, wouldn't seem to be one to fit in with the group, but does so seemlessly. Oona Laszlo rounds out the eccentric cast, so to speak, becoming Chase's lover and working as a ghostwriter.

Taking a step back, a mental catalogue of Chronic City's events, places, and theories make for a unique potpourri of plot points. An escaped tiger is wreaking havoc in Manhattan, causing subway delays and building destructions, and the panic is an apt metaphor for post-9/11 hysteria. Perkus Tooth is a walking encyclopedia of possible conspiracy theories, his migraines and drug use either a cause or a mask of his mentality. He believes that the New Yorker magazine uses subliminal fonts, that Marlon Brando is still alive and holds the answer to a series of revelations, and is obsessively attempting to acquire a chaldron via marathon eBay auctions. Janice keeps an impossibly optimistic view of her dire situation, her love letters to Chase being both incredibly romantic as well as casual about the impending doom of the inhabitants of her space station. Biller, a homeless "friend" of Perkus, is the creator of a "Sim City"-like online world, a universe of avatars and deceptions that blur the already fragile lines between reality and fantasy.

These characters and plot points are varied and shrouded in mystery, but Lethem does an incredible job of holding them together with precise details. It's a combination of contemporary urban mysteries and old-fashioned, detailed storytelling. In one early chapter, Chase describes the view of a church outside his apartment window:

"Against a white sky the stones of the church are gray-brown. They're smutched, like scraped toast. Against blue, the stones reveal an earthiness. Sienna? Umber? In sunset, the church nearly looks blue. Darker stones are bricked at right angles, lines of mortar visible between them, while lighter stones form the tight-jointed and apparently seamless triagular spires which cluster, one atop the other, each crowned with a small stone cross, nesting toward the single highest cross at the peak (Lethem 124-125)."

These quiet, detailed passages are a wonderful contrast to some of the faster-paced scenes, written with equal precision, but a hedonistic urgency. In this passage, Richard is helping Perkus in trying to win an online bid for a chaldron:

"Unspeaking now, Richard scrambled to bid. He got it up to thirty-four thousand, a heroic labor of blunt hairy fingers, tooth-grinding jaw visible even through his beard. His white shirt was widely stained under the arms and stank fiercely. The effort took two minutes, more. At forty-eight seconds another veiled bidder drove it to thirty-six thousand, then another, with five seconds to spare, took the jewel at at even forty grand. I think we all three groaned as if gutshot (161)."

The characters are exceptionally well-written, with each one bordering on intentional stereotypes without fully going into their expected roles. Chase understands his status as a marginally famous figure, and is agonizingly self-centered, much to the chagrin of the other characters as well as the reader. However, he shows flashes of love and care that are consistently lurking below his egocentric exterior. Even though he's mired in an affair with Oona, there's no doubt that he is genuinely falling for her, and both sides understand that it's a fling, with Janice looming, god-like, in the space above. Perkus is one of the most intriguing characters in recent fiction, equal parts aging hipster, conspiracy theorist/drug enthusiast, and, as it's revealed, hopeless romantic. As hinted at in "Ava's Apartment," his former living space is blocked off, forcing him to take shelter in an apartment complex intended for stray dogs. With such new surroundings and priorities, he seems to take a drastic turn, but his mentality continues its crumbling, and his downfall is written beautifully and painfully.

However, Perkus's deterioration is where the novel seems to break away, either for better or for worse. Lethem constructs the narrative as an intentional blend of storytelling and mystery, and (SPOILERS) Perkus's death is immediately rendered as a possible murder and/or conspiracy. The blend of realism and alternate realities is a slow trickle up to that point, but then the floodgates open, turning every understanding on its head. Another example is the tiger. At the first, the story is set up with the implication that Manhattan is dealing with an escaped tiger. In the middle, it's revealed that the "tiger" is actually a cover, that the real cause of the problems is machinery gone awry underneath the city streets. Then, towards the end, Chase and Richard see an actual tiger in the pre-dawn hours. This one plot point alternates between reality, conspiracy, and then back to reality. What makes it intriguing (as opposed to unequivocally infuriating) is that it's a sign of nothing else being true in the novel. In addition to this spin, Lethem continues to write with careful detail, injecting his beautiful passages into what should be intense confusion:

"At the corner of Eighty-fourth we came upon the giant escaped tiger, moving silently along the side street to cross Lexington there, heading east, away from Central Park. We froze when its long streetlamp-foreshadow darkened the intersection, so stood rooted like statuary in our deep footprints as the creature padded to the center of Lexington's lanes, under the dangling yellow traffic lights which shaded the great burgeoning white-and-yellow fur of its ears and ruff now green, now red, the procession of timed stoplights running for miles beyond through the calming storm (433)."

These mix-ups and twists are intentional, since Lethem is too good a writer to make his narrative unintentionally vague. It's ultimately up to the readers to decide whether or not the various changing climaxes are left vague to spark further thought, or if it's a sort of postmodern mess. I enjoyed this novel (although I feel that The Fortress of Solitude is much better), but I can't shake the view that Lethem, as skilled a novelist as he is, painted himself into a corner. Despite this, his passages and characterizations alone are worth the price.