The Structure of Scientific Revulsions

"A science that has not legitimated itself is not a true science; if the discourse that was meant to legitimate it seems to belong to a prescientific form of knowledge, like a 'vulgar' narrative, it is demoted to the lowest rank, that of an ideology or instrument of power." --Jean-Francois Lyotard, The Postmodern Condition 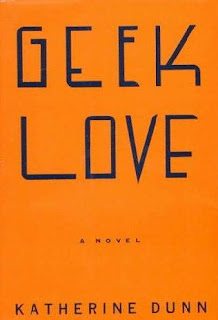 Many months before my previous post, I realized (much to my personal chagrin) that my readings and writings have lacked attention towards female authors. My recent looks at Nella Larsen and Sylvia Plath aside, I've run a bit close to relying too heavily on the canon of "middle-aged white men." These reasons are just part of why I chose to read Katherine Dunn's 1989 novel Geek Love. In addition to mixing up the authors that I write about, an essay on this particular novel adds another piece to my ongoing looks at the benefits and grey areas of postmodern literature. Given the era in which it was published, some critics might hint that the classification should be "post-postmodern" instead. While this cannot be dismissed entirely, it would steer my initial thoughts into too many other directions. As I've said or hinted at many times before, the definition(s) of postmodern literature have a tendency to be too encompassing at times. I'm all for inclusiveness, but the umbrella can only cover so much, depending on the area of study. However, Geek Love lends itself to a strong area of postmodernism, namely the established (but still emerging) genre of 'magical realism.'

The novel tells the story of the Binewski family, traveling circus performers, led by the parents, Al and "Crystal Lil." Al inherited "Binewski's Fabulon" from his father, and the courtship between the two is revealed in an oft-repeated tale, with combinations of old-fashioned romance and the grotesque realities of carny life.

"'There I was,' said Papa, 'hosing the old chicken blood and feathers out of the geek pit on the morning of July 3rd and congratulating myself for having good geek posters, telling myself I was going to sell tickets by the bale because the weekend of the Fourth is the hottest time for geeks...when up trips your mama, looking like angelfood, and tells me my geek has done flit in the night, folded his rags as you might say, and hailed a taxi for the airport....

'I couldn't climb into the pit myself because I was doing twenty jobs already. I couldn't ask Horst the Cat Man because he was a vegetarian to begin with, and his dentures would disintegrate the first time he hit a chicken neck anyhow. Suddenly your mama pops up all for the world like she was offering me sherry and biscuits. 'I'll do it, Mr. Binewski,' she says, and I just about sent a present to my laundryman.'(Dunn 4-5)."

After their marriage, their children (including the deceased fetuses, encased in display jars) become performers in the family act, with Al believing himself to be an amateur scientist, supplying Lill with drugs and radiations with the intention of creating children with physical attributes necessary for a freak show. One child, Olympia (Oly) is the narrator of the story, and describes her conception in detail:

"I was born three years after my sisters. My father spared no expense in these experiments. My mother had been liberally dosed with cocaine, amphetamines, and arsenic during her ovulation and throughout her pregnancy with me. It was a disappointment when I emerged with such commonplace deformities. My albinism is the regular pink-eyed variety and my hump, though pronounced, is not remarkable in size or shape as humps go (8)."

Arturo the Aqua-Boy is the undisputed star of the "Binewski Fabulon." He's egotistical, pompous, and is the love object of his sisters and a revolving door of sexual conquests. He does his show from a tank, with flippers instead of arms or legs. Electra (Elly) and Iphigenia (Iphy) are piano-playing Siamese twins who later prostitute themselves to men looking for bizarre sexual adventures, and wage a passive-aggressive battle for Arturo's affections and approval. Fortunado (nicknamed Chick) looks like a "norm" (the Binewski's slur towards non-deformed people), but has the power to move items with his mind. The novel is divided into two eras. The bulk of the story recounts the history and downfall of the family and the entire act, and a smaller narrative details an aged Oly's attempt to save her daughter, Miranda, who unknowingly lives in the same boarding house (with a deaf, physically/mentally broken Lil serving behind the front desk, unaware that her daughter lives up the stairs). Miranda has the slightest defect, a small tail, but is otherwise beautiful and sought-after. She gains the attention of Miss Lick, a wealthy businesswoman who finances disfiguring operations for young women to realize their mental and self-supporting potential without having to rely on their sex appeal.

The obvious, basic readings of Geek Love revolve around the twisting and polarizing notions of "family values," which Dunn consistently challenges and turns inside out. Given the solitary nature of the family business, Al and Lil cannot rely on ultrasounds, so the actual births reveal if the children are worth keeping. In their world, a healthy, normal child is cause for great sadness. Before Chick's mental powers are revealed, Dunn writes the scene of his normal birth with touching sadness. By this point in the novel, the reader is fully involved in the offbeat workings of the Binewski lifestyle, and it's almost impossible to not feel equally upset at the birth of a child with no apparent defects.

"'It's true, Lil. There's nothing. He's just a regular...regular baby.' And then Lil's face is wet and her breath is bubbling nastily. Al is darting at me where I am holding Arty up in the doorway, and Elly and Iphy are pulling on my arm, and Al says, 'You kids fix some supper for yourselves--get, now--leave your mom to rest.' And Lil's soggy voice is crying, 'I did everything, Al...I did what you said, Al...What happened, Al? How could this happen?' (64)."

The lives of the Binewskis are written in a style of Shakespearean tragedy, taken literally. The definition of tragedy involves the downfall of a character due to a moral flaw, and the moral shortcomings of the family members are presented as graver than their physical shortcomings (which, in the world of the novel, aren't shortcomings at all). Arty's personality is written especially well, with his selfishness and magnitude growing so powerful that it's inevitable that he will have a serious downfall. His ability to draw crowds leads to a massive cult following, with people traveling with the circus as pilgrims in the "Arturan Cult," going so far as to self-mutilate in order to achieve physical "perfection." The slight and obvious nods to religious fervor and cult followings are explicit, and again, is written to highlight Arty's personality as opposed to his physical state. Anyone with excellent vocal delivery and a "believable" enough message can inspire shocking acts.

Dunn's writing style is vivid, but the idea of personality supplanting physicality can also apply to the prose. Take away the grotesque and the bizarre nature of the characters, and the novel becomes a standard family saga, complete with asides, sketches, rises, and falls. This is not to say that the characters aren't compelling or unique, but the fantasy elements have a tendency to cloud the plot. The future setting, in which Oly plots to stop Miss Lick from changing her daughter, is much too forced, with just enough unanswered questions to be irksome instead of suggestive for further thinking. Returning to Geek Love's place in the postmodern movement, one can point to the almost gleeful mixing of genres. The novel is equal part tragedy, saga, and science fiction. However, despite Dunn's ability to separate the gawkier areas from the sensitive character studies, there is an almost too straightforward bent, which becomes all the more glaring when matched up to the intention to create a novel that's supposed to be anything but straightforward. But, in another example of opposites, there's just the right amount of sweetness and simplicity to render the tale compelling. I'm curious to see how Dunn mapped out her earlier novels, and in her future works, if they do follow the same intangible patterns, a little more balance will undoubtedly strenghten any intentionally varied narratives.