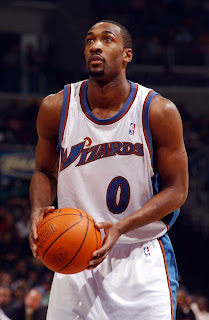 I don't write about sports that often, with my last handful of writings being devoted to books on sports. Rarely do I feel compelled to write about athletic goings-on; reputable sports blogs are plentiful if one needs information, updates, trade rumors or (sadly) gossip. For example, I kept my readings/awareness of the recent Tiger Woods scandal to a scant minimum, and not for a second did I consider any kind of write-up about it. First of all, I have no interest or knowledge about the game of golf, not that the sport had anything to do with his infidelities. Secondly, on personal principles, anything that would normally provide fodder for US Weekly would have to have a major under-the-radar, relevant cultural spin for me to devote time to it on this blog. My focus is on books and media, not 'flavor of the minute' whisperings. If that keeps Chicago Ex-Patriate from ever being a well-known blog, well, then I'll still sleep very well at night.

However, the recent developments of the Gilbert Arenas gun scandal have been on my mind a lot lately. Reports and summaries can be found elsewhere, but here's a brief recap: Arenas, an All-Star guard for the NBA's Washington Wizards, has been indefinitely suspended for bringing guns to the Verizon Center, the Wizards' home arena. His initial claim was that he did so to get the weapons away from his house since he has a newborn daughter. Since then, sources have revealed that he did so due to a gambling dispute with teammate Javaris Crittenton. Supposedly, the two men pointed guns at each other in the locker room, with Crittenton supposedly going so far as to load and cock his weapon before pointing it at Arenas. After this initial fallout, Arenas has joked about the incident via his Twitter account, and a photograph is circulating online, apparently showing him pointing imaginary guns at his teammates during a pregame warmup. (Click here for the full details and statements. This summary was written using this information.)

The suspension was given on Wednesday by NBA Commissioner David Stern. The logistics are not to be questioned--had one of the weapons gone off and injured/paralyzed/killed someone, it would have become the most dubious, tragic incident in American sports history. However, the story brings up a plentiful amount of sociological issues. The seemingly obvious issue, aside from the risk of death or injury, is the NBA's attempt to distance itself from hip-hop culture. To me, the fallout between Arenas and Crittenton goes beyond the idea of street culture being a problem in professional basketball, and occupies the shadier, problematic "virtues" of masculinity. If another man slights you, you slight him back. If he's in debt to you, you threaten him. If he draws a gun on you...the example can go on until the sobering end. Yes, guns are a part of the street culture that Stern is trying to clean up in the league. A lot of people may think that this is a racial issue. However, Jason Whitlock, arguably my favorite sportswriter and racial commentator, doesn't believe this to be a case of black and white; in a recent column, he made the claim that it's a case of Arenas and Crittenton being fantastically stupid. However, the underlying idea of masculinity gone awry plagues all sports and athletes, black or white.

"Although it is clear that the actions of Mr. Arenas will ultimately result in a substantial suspension, and perhaps worse, his ongoing conduct has led me to conclude that he is not currently fit to take the court in an NBA game. Accordingly, I am suspending Mr. Arenas indefinitely, without pay, effective immediately pending the completion of the investigation by the NBA."--Commissioner David Stern

The word that jumps out the most to me in this statement is "fit." This is in likely reference to Arenas' mental fitness, since he's taken to Twitter and his sense of humor in downplaying the severity of the incident. Even before this, he's been well known as a fun-loving, slightly eccentric athlete, and playing in the Washington, D.C. market, he isn't the most highly visible All-Star. His personality draws just as much attention as his game. Sports history has had its share of quirky, eccentric athletes, from Satchel Paige and Casey Stengel of the earlier days to Barry Zito and Dennis Rodman of recent years. It's when problems and scandals arise that these quirks take on new dimensions, becoming possible masks or fronts for deeper issues.

The history of the Washington Wizards organization lends itself to both intense irony and slight hypocrisy. Abe Pollin, the late team owner, changed the team's name to the Wizards from the Bullets due to inner-city violence in the D.C. area. Since the gambling has taken a back seat to the violence, it has to be noted that the former Wizards Director of Basketball Operations, Michael Jordan, had a very well known penchant for gambling problems, whether on team planes as a player, on golf courses, or in casinos. Yes, guns completely change the significance of the Arenas scandal, but one wouldn't be too far off in guessing that, had this happened to Jordan in his prime, or during his brief playing career with the Wizards, a lot of people would have looked the other way. But that's what six championships and being the face of a league will buy you--much more forgiveness and wiggle room. When it comes to sports, winning is everything. And that adds another twist to Gilbert Arenas' problems. As of this writing, his team is 12-22, in last place in the Eastern Conference's Southeast Division. In the past few years, Arenas has been injured more than he's been on the court, and the Wizards haven't even come close to being a serious championship contender. Literally, this scandal is the last thing that the organization needs.

Options include voiding Arenas' contract or trading him after his suspension and legal problems are cleared up. If his contract were to be voided, time would prove that he'd quickly be picked up by another team. Of all the other players in the NBA, Arenas should look towards Lakers forward Ron Artest. If Artest can mature, win the confidence of Stern, and insist on being a role player for a championship contender (he's fully embraced Isiah Thomas' Secret, as explained by Bill Simmons in The Book Of Basketball), then coming back from a gun scandal should be no problem for Arenas. It's the surrounding problems--Arenas' lax attitude, his team's poor performance--that add a lot more to the main issue. Once those clear up, and he becomes committed to leading a winning team, it will have the makeup of a wonderful comeback. We've seen it before, and we'll undoubtedly see it again.
at January 08, 2010