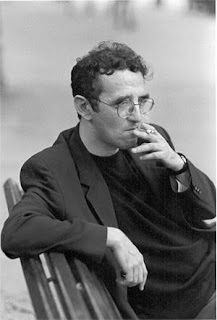 A brief note before I get into thoughts on Roberto Bolano's poetry. In the past, this post would have immediately been filed under a "Casual Friday" heading. While I do plan on keeping that theme available for more light poetry topics, I'm more embarrassed by it than not. In the past few months, my scope, appreciation, and understanding of poetics has increased dramatically. While I do not claim to be any kind of expert or scholar in this field, I've found myself reading much more of the form as well as writing my own at a pretty substantial pace. These feelings began to take shape after I wrote my last poetry update on John Berryman. Not only was I not pleased with the quality of my analysis, the idea that I had casually lumped an esteemed poet into such a flippant categorization ultimately meant that I was at best missing the point and themes of the poems, and at worst I was demeaning the writer and not taking the proper time to engage myself with the nuances of various poetic forms.

Now, keeping this personal criticism going, I felt even worse about all of this after I read The Romantic Dogs, the first English language collection of Roberto Bolano's poetry. I've written about and studied his novels in great depth, with great time, and given that Bolano considered himself a poet above all else, perhaps I should have stumbled across this collection a lot sooner. A few months ago, I wouldn't have given a second thought to referring to the late Bolano as a "novelist." Even after more studying of his life and works, I might have upgraded (only to prolong the inevitable) this to referring to him as a "writer." Now, with a decent understanding of his mission, along with a few weeks of reading his poetry, it's more respectful, not to mention apt, to refer to him as a "poet." This is how he referred to himself during his lifetime ("The poetry makes me blush less"), so, at least for myself, that is how I will signify him, from here and into the future, encompassing any writings and essays in which he is my subject, poetically or fictionally.

With all of this said, I could not help but notice a striking similarity between some of the subjects of his poems as well as the subjects (and obvious/latent themes) in the novels of his that I have read. I'm not attempting to make the fatal mistake of blurring of confusing the distinction between a writer's poetry and fiction, especially given that Bolano clearly found fiction to be a sort of lesser art, a lesser canvas for his messages and talents. However, I found it virtually impossible to NOT think of the novel The Savage Detectives as I read the poem "The Lost Detectives."

"Detectives lost in the dark city.
I heard their moans.
I heard their footsteps in the Teen Theater.
A voice coming on like an arrow.
Shadows of cafes and parks,
Adolescent hangouts.
Detectives who stare at
Their open palms,
Destiny stained by their own blood.
And you can't even recall
Where the wound was,
The faces you once loved,
The woman who saved your life (Bolano 47)."

Considering that the novel focuses on two wandering, conflicted, yet self-assured poets through their travels and exploits in Mexico and beyond,

acts as a brief glimpse into the dizzying scenes in The Savage Detectives. On the flip side, as I write this, I'm also reminded of Juan de Dios Martinez, the earnest yet equally conflicted detective featured in the novel 2666.

"Detectives who stare at
Their open palms,
Destiny stained by their own blood."

Of course, making these kinds of simple connections might seem almost too easy, but to me, it shows how Bolano's devotion to poetry was manifested into his novels. While I'm still in the process of reading his complete bibliography, I can only imagine that his other novels can be tied into some of his other poems, not limited to the pieces that appear in The Romantic Dogs. However, to respect his work as a poet, I'd like to close with a look at one of the poems as its own piece, separated from any connection to his fictional works.

"It's raining and you say it's as if the clouds
were crying. Then cover your mouth and speed up
your step. As if those emaciated clouds were crying?
Impossible. So then, why all this rage,
This desperation that'll bring us all to hell?
Nature hides some of her methods
in Mystery, her stepbrother. And so, sooner than
you think, this afternoon you consider
an afternoon of the apocalypse, will seem nothing but
a melancholy afternoon, an afternoon of loneliness lost
in memory: Nature's mirror. Or maybe
you'll forget it. Rain, weeping, your footsteps
resounding on the cliff-walk. They don't matter.
Right now you can cry and let your image dissolve
on the windshields of cars parked along
the Boardwalk. But you can't lose yourself (83)."

While the gender of this poem's subject is left undefined (and at first glance irrelevant), it's not out of the question to think that the subject is a man. Bolano was adept at, whether through stereotype (crude, unemoting thugs) or reality (a gifted ladies' man who happens to be bisexual), masculinity in all its forms. However, ultimately the gender is not important, since the happenings are universal. Melancholy, rainy afternoons can fill anyone with a sense of foreboding, dread, or keen awareness. The imagery of Mystery being Nature's stepbrother is almost perfect, and could very well nod towards the sometimes dysfunctional relationship between science and spirituality (perhaps I'm reaching just a bit, but I feel there's some stock in that reading of the line).

No matter who you are or how you view yourself emotionally, there are some days and moments in which a simple thing (such as a humanized view of a cloud, in this instance) can trigger deeper, more complex thoughts. Ultimately, this is the genius of Roberto Bolano the poet. He can accurately depict all things local, political, and creative, yet at the core of these ideas is the simplicity and the complexity of all human emotions.