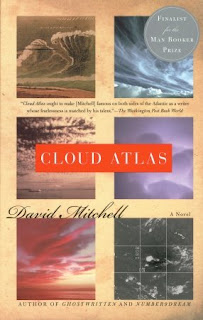 This is probably the most cliched title that I could have come up with for this essay, but no matter. Given the complexities of the novel Cloud Atlas, it's probably fitting that a sub par title can join with a serious essay. David Mitchell's 2004 epic is one of those rare novels that has the potential to appeal to both academic circles as well as specific genre enthusiasts. Pick a style, pick a genre, and chances are that the book touches upon it in some capacity. Historical fiction readers will enjoy the narratives of Adam Ewing and Robert Frobisher. Mystery lovers will be enthralled by the modern conspiracy tale involving journalist Luisa Rey. BBC comedy fans will likely eat up the comic, horrific misadventures of publisher Timothy Cavendish. Also, but not finally, science fiction readers will appreciate the dystopian visions in the chapter "An Orison of Somni-451."

Or not. There's also the very real possibility that readers of these genre niches would not want anything to do with Cloud Atlas, especially since it's a sin to even think about reading the varied chapters apart from the other ones. Despite my earnest claim that the novel has wide-ranging appeal (I still hold this to be true), it's a complex work that cannot be digested by flipping to and fro. The chapters (which actually work as novellas) need to be read together, despite the fact that they get separated into halves, thanks to some creative, painstaking connections between the various characters and eras. Even the most studious reader will, on first reading, miss at least a few of the plot points, not to mention finding the occasional one challenging. No matter how long this essay turns out to be, I will undoubtedly miss some of the major ideas and passages, but I'm hoping that what I do cover will stir up interest in this book, especially for people who are not familiar with it; I was one of those people up until a month or so ago.

"The novel as series of nested dolls or Chinese boxes, a puzzle-book, and yet--not just dazzling, amusing, or clever but heartbreaking and passionate, too."- Michael Chabon, from a quote on the back of the paperback edition.

As much as I admire Mr. Chabon, his blurb tells nothing about the novel, not that this is entirely his fault. However, it tells almost everything that's to be expected, too. Such is the mystique of Cloud Atlas. It bounces from time to time, from style to style, matching anything as good as Thomas Pynchon, as well as the intentional melodrama of Romantic-era fiction. Every change and jump in style is calculated and timed perfectly. The first halves of the tales tell enough to leave the reader aching for more; the second halves close out perfectly, whether their endings are jarring or peaceful.

"The Pacific Journal of Adam Ewing" opens the novel, and it's probably the greatest example of Mitchell's fluency in the history of literary styles. This journal of everyday life, intrigue, and culture clashes in the sixteenth century is said to be influenced by the works of Herman Melville. Personally, I found the pacing, language, and even the punctuation reminiscent of Aphra Behn's Okonokos.

"Amidst nebulous quilts & summery pillows I lay, in a bedroom in San Francisco similar to my own. A dwarfish servant said, 'You're a very silly boy, Adam.' Tilda & Jackson entered, but when I voiced my jubilation, not English but the guttural barkings of an Indian race burst from my mouth! My wife & son were shamed by me & mounted a carriage. I gave chase, striving to rectify this misunderstanding, but the carriage dwindled into the fleeing distance until I awoke in bosky twilight & a silence, booming & eternal. My bruises, cuts, muscles & extremities groaned like a courtroom of malcontent litigants (Mitchell 19)."

Later on, Mitchell depicts the relationship between white colonists and Natives, spanning from flat-out racism to acts of bravery and charity that break down racial barriers. The reader has to take the bad with the good, and Mitchell crafts this section with indications that the ending will turn out either happily or poorly for Ewing. This balance is nearly perfect, since either ending is a very real possibility heading into the final pages.

The letters of composer Robert Frobisher to one Rufus Sixsmith compose "Letters From Zedelghem," and ultimately my favorite passages among many in Cloud Atlas. The letters stem from the early 1930s, and it's almost a shame that they weren't actually written by a novelist from that era. If Cloud Atlas had been written seventy years earlier, I'm fully convinced that Robert Frobisher would be included with some of the most well regarded heroes in international literature. At first glance, he's a gifted composer, seeking an apprenticeship with an eccentric master composter. However, as his letters take shape, we see his independent spirit, his lack of patience for stupidity, and a wonderful twist of humor, especially given his background and social surroundings.

"At the van De Veldes' town house, the girls were arranged on the stairway to greet me in ascending order of age--half-expected 'em to burst into song, and stone the crows. Sixsmith, that's what they did. 'Greensleeves,' in English. Syrupy as humbugs. Then Mme. v.d. V. pinched my cheek as if I were a homecoming runaway and said, owlishly, 'How do you do-ooo?'....all girls posses a thoroughly unjustified self-confidence. A v. long sofa sagged beneath this family of porkers...She asked this: 'Mr. Frobisher, are you well acquainted with Sherlock Holmes of Baker Street?' Well, thought I, the day might not be a complete wreck. A girl with a taste for irony most conceal some depths. But Marie-Louise was serious! A congenital dunce (448)."

The ending of his segment is unsettling, especially given that, underneath his intelligence and bravado, his needs and desires were no different than anyone else's. However, the writing style employed by Mitchell would, as its own novella, compose one of the best epistolary works ever. Even though we're only reading one side of this correspondence, the mix of emotions, details, and black humor are captivating. Mitchell's characters have a tendency to reappear in his other novels.I can only hope that Robert Frobisher has appeared before, or will appear in a future work.

I found the sectionsset in the future ("An Orison of Somni-451" and "Sloosha's Crossin' An' Ev'rythin' After") the most challenging of the novel, and part of me wanted to blame my own lack of reading in this genre. However, another part of me wonders whether or not these chapters were supposed to be somewhat vague in order to leave (in the context of the novel) some of the plot points open for various interpretations. These sections are worth multiple readings (as is the rest of the work as a whole), but despite my confusion, not having every event in these chapters explained in my mind did not detract from my overall understanding and appreciation. And, even with leaving two of the key chapters virtually unmentioned, what should be the "overall understanding" of Cloud Atlas? The events are connected via names, relationships, manuscripts, and a recurring comet-shaped birthmark. These connections are constantly hinted at and mentioned, linking everything despite the invidivuality of the tales. Perhaps this does warrant Chabon's use of the nested doll metaphor. The text is a whole, yet is begging to be broken down. The segments are vastly unique, but unequivocally more than just the sum of its parts. Mitchell didn't create a mystery or an intentional labyrinth of a novel, yet the blending of genres might hint to that on the surface. His talents as a writer are staggering, yet there's no subliminal winking or acknowledgement of this, a la Dave Eggers, for example. Mitchell simply tells the stories as best he can, and in the process created one of the best novels of this young century.