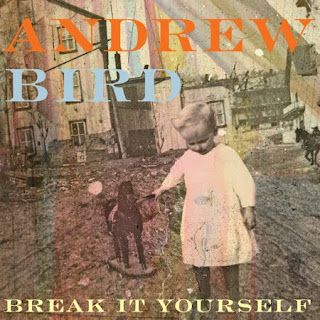 I cannot remember if he was citing a specific review or not, but in a recent conversation, my best friend shared a terrific quote regarding the music of Andrew Bird: "If you were explaining Bird's music to someone who wasn't familiar with him, it would be impossible to not sound completely pretentious." Granted, this is how I feel with most music writing/reviews, but it fits Bird almost perfectly. His sounds, lyrics, and arrangements have consistently created some of the most original albums in the last ten years. More than once, I've heard his music described as "baroque rock," which is literally true, but his albums are always so varied, with such combinations of instruments and styles, that it's pointless to attach genre-specific labels. Even his "weaker" efforts (in 2009, in a very brief write-up, I likened Noble Beast to a way to introduce a Bird novice to his style, and then they would be blown away by his earlier works) have at least a handful of amazing tracks. Last month, he released Break It Yourself, and, after several listens, I feel it's one of his best works, utilizing his standard creativity with slight tweaks.

"Desperation Breeds," the opening track, thrusts the listener into dual trains of thought--it's an ecological plea, but manages to lay the foundation of the album's overall atmosphere. Break It Yourself is full of desperate stories--bees, broken communications, repetitious history, and even war stories--and there's a sense of desperation on Bird's part, but in a positive sense. While I respectfully disagree with this assessment, Treble's Justin Stephani feels that the novelty of Bird's style has worn off. This would be true if Bird's music was based on a gimmick, but I can see how his standard styles have been consistent through his last four albums, and perhaps this has grown tiresome to some listeners. But this album, in addition to its creative songwriting, has a definite "edge" at times. There are quiet, string-based interludes, but also a good deal of intensity, a trait that wouldn't be associated with Bird, since his music always speaks for itself; he has never had anything to "prove."

But here, he manages to add layers and combinations, going from one style to another in the same span, creating bridges between specific songs, but without anything being jumbled or with obvious flourishes. An excellent example is "Danse Caribe." It begins with an excellent guitar and string, but as the song goes on, this rises into an intense, folk-like fiddle. This rapid switch is obvious upon multiple listens, but at first, and when you're listening to casually, it works as just the natural progression of the song. Two vastly different atmospheres don't necessarily "combine," but manage to work together as part of specific piece.

"Give It Away" and "Eyeoneye" take this even further. Lyrically, "Give It Away" is the most catching track, being a neat take on love as a statistic and a currency, but becomes more noticeable as an example of some of Bird's best vocalizing, which keeps going on the follow-up track. His singing voice has always been fantastic, but on this album, it feels more careful and confident. The emphasis is normally on the instrumentation and Bird's whistling, but at times on "Eyeoneye," his voice stands alone, with beautiful echos and reverberations. He's one of the rare singer-songwriters who doesn't get attention for his singing voice, but here, it's impossible to not notice and enjoy. He has never had real vocal distinctions (Thom Yorke's screams and rasps, Colin Meloy's nasal tilt), but it has always been pleasant. This time around, the listener is forced to take notice. He's always used it as another instrument, but it's almost shocking to realize that it could stand on its own.

Everything I've mentioned so far comes together beautifully on "Lusitania," a duet with St. Vincent. Bird offers his amazing whistling, but then his singing starts, followed by the soft vocals of St. Vincent. Their vocal styles are a wonderful compliment, taking unique lyrics (early wars as an extended metaphor on communications), and making the entire combination an awesome display of creativity. It's beautiful and touching, but it's easy to be fooled by its apparent simplicity--there's a lot going on right under the surface. And that makes for yet another layer for Break It Yourself: Bird's usual careful touches are just as important as the more bombastic flourishes. 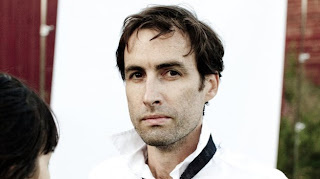 If I left it alone, my above mention of Stephani's review would, out of context, seem to hint that he disliked the album. But he concludes with:

"The difference here is that critical interest has already piqued, while Bird arrives at this stage so late, knowing how to harness that zeal and confidence with educated, experienced expertise. For those paying attention, close attention, this is nothing short of a mini-resurgence (creatively speaking). And for that matter, it's some of his best material to date. "

Perhaps I just don't read as many music reviews as I used to, but again, I've never felt that Bird has "piqued," but I do agree with the idea that this is some of his best work to date. There's a definite need to pay close attention, since there are smaller pieces to what feels like an album with everything thrown in. Is this Bird's resurgence? It depends on your current view of his works. Personally, instead of a resurgence, I would call this a reminder. Noble Beast was Bird in a more minimalist manner, and with Break It Yourself, we find him going all in, playing to his strengths, but at the same time, he reminds of his sometimes overlooked gifts. This is one of the more satisfying albums I've heard in awhile. I'm going to be seeing him perform in July, and I'm anxious to see how these creative and technical details translate into a live show.
at April 13, 2012