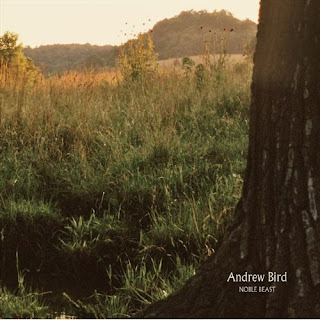 The wave of highly awaited music releases got off to a phenomenal start this past Tuesday, with Merriweather Post Pavilion (Animal Collective), Noble Beast (Andrew Bird), and Get Guilty (A.C. Newman) being the major albums to drop. As has been the case for several weeks (thanks to Internet leaks and over-anticipation) the Animal Collective disc has posted universal praise, so much that it was rumored that Barack Obama was going to wear an Animal Collective pin below his American flag pin during the Inauguration. The latter joke aside, the record is stunning and rivals any major release of the past few years. However, my focus this week has been on Andrew Bird's Noble Beast. I've given it several listens, and I am torn between two reactions.

One, the album is impressive, and given Bird's track record (no pun), I'm fully convinced that he cannot release a bad album. This is not to say that his every output is a modern classic, but given his musical acumen (a history of classical music training; proficiency in multiple instruments; a strong singing voice; brilliant, often surreal lyrics, etc.), his intelligence wouldn't let a sub par record happen. My second reaction, based on what I've written above, is that Noble Beast is slightly disappointing, based on his last two albums.

The first album by Bird that I listened to was 2005's The Mysterious Production of Eggs, which remains one of my favorite albums ever. He combined fantastical, sonic-trippy melodies, his should-be trademarked whistling, and some of the most original lyrics ever:
"She says I like long walks and sci-fi movies/You're six foot tall and East-coast bred/Some lonely night we can get together/and I'm gonna tie your wrists with leather/And drill a tiny hole into your head."
2007's Armchair Apocrypha had more focus on the music, with the lyrics still borderline brilliant (namely "Plasticities"). The music on the album is tight and compact, not as varied as Eggs, but still carrying a kinetic punch.

Noble Beast works on both a lyrical and melodic level, but it still feels like something's missing. The opening track, "Oh No," is vintage Bird, complete with the whistling, a steady, infectious beat, and lyrics that would have fit perfectly on Eggs. The closing track "On Ho" (it's fitting that I quoted the song "Fake Palindromes" before) opens with some achingly beautiful violin work, yet another nod to his talents. While there certainly aren't any bad tracks, the middle of the album goes on auto-pilot for the most part. The music is reminiscent of his past albums, but it's missing 2005's lyrical risk-taking and 2007's focus on compact instrumentals. Overall, it's a recommendable album, and it's rare for a musician's latest work to be labeled as a good introduction to his/her canon. For an Andrew Bird novice, it would be a perfect disc to pick up or download. The music is far better than ninety percent of what's available today, and the new listener will in turn be blown away by his earlier efforts.
at January 22, 2009