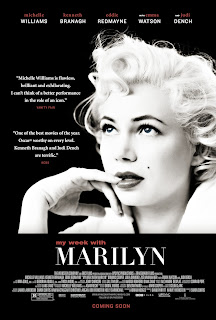 I've never give much thought to Marilyn Monroe, not as an actress or as a sex symbol (a term I tend to loathe anyhow). As I've written about with James Dean, in today's landscape Monroe has become a tangible commodity who people try to pass off as intangible. There are those tired lists of the sexiest women of all time, the unabashed, decades-long marketing, and far too many books, photo collections, and consistent retrospectives. Harsh? Possibly, so in that case, why did I actively seek out a viewing of Simon Curtis' latest film My Week With Marilyn? I read some genuine praise for Michelle Williams' performance, and I still, a year later, think back to Blue Valentine and get chills. Also, the film seemed to promise more the trappings of a biopic, focusing on the 1956 filming of The Prince and the Showgirl, a Hollywood vehicle for actor/director Laurence Olivier. I have not read either of Colin Clark's two memoirs about working with Monroe, but if they're anything like the film, they would reek of fantasy and fluff, with so much below the surface waiting to be explored.

The film opens with Colin Clark (Eddie Redmayne), an idealistic young Brit who yearns for a career in the film business instead of following his stodgy family into academia. He manages to appeal himself into an assistant spot on the production of Olivier's (Kenneth Branagh) The Prince and The Showgirl. The hope for everyone involved is for the film to accomplish two goals: one, to provide Monroe with more esteemed acting opportunities, and for Olivier to broaden his scope with a mainstream Hollywood film. When she arrives in England, problems start almost immediately. Her marriage to Arthur Miller is shaky from the beginning, she's constantly late to the set or affected by an assortment of pills, and to the chagrin of Olivier, she's constantly followed and prepped by Method teacher Paula Strasberg. As Monroe's insecurities and clashes with Olivier mount, she becomes increasingly erratic and withdrawn. When Miller leaves to visit his children, she escapes to the English countryside and asks Colin (who is attempting to be a mediator between her and Olivier) to join her, hoping to have someone on her side as she copes with her personal struggles and attempts to complete the film. Naturally, he finds himself falling for her, and it's up to the viewer to ascertain whether it's puppy love or a true connection. 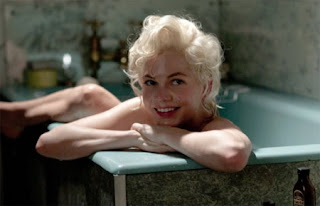 I'll begin with the positives. Michelle Williams is an extremely talented actress, and while this isn't her best role, she succeeds in her portrayal. I'm sure there are more than a handful of blurbs that say she "inhabits" the role, but in reality, she manages to portray Monroe as most people would imagine her being in real life. She's insecure and seemingly bipolar, but with a naturally flirtatious air and a desire to be taken seriously, both as an actress and as a human being. The physical resemblance is impressive, and Williams adds a flair for the melodramatic, but not in a negative way. When she's happy and confident, she bubbles over with enthusiasm. When she's depressed and withdrawn, she hovers near a seemingly suicidal low. Given that the "mystique" of Monroe has been portrayed many times, the role works best when the focus is on her acting and preparation. Toward the film's end, the insecure side dominates and veers into the "expected" down moments, but through no fault of Williams, but rather writer Adrian Hodges (more on him later). Branagh doesn't quite resemble Olivier, but portrays him not as an artistic tyrant, but rather as someone with little patience doing his best to make the film proceed. Branagh obviously has fun with the role and does well with his interpretation, especially since Olivier's off-screen persona isn't as heavily documented as Monroe's.

Two other performances are small, yet enjoyable: Zoë Wanamaker portrays acting coach Paula Strasberg, and while her strict adherence to coaching Monroe in the Method is portrayed comically, it's fun to see the clash between her and Olivier. In one scene, Strasberg playfully bows in front of Monroe and raves about her genius as a true actress. Instead of being a true guide, she's merely paying her lip service, and putting far too much stock into Monroe's role in what everyone assumes will be a forgettable film. Judi Dench offers a very sweet interpretation of Sybil Thorndike, an actress who also attempts to mediate between Monroe and Olivier. At first, her casting seemed to be based on mere recognition, but Dench plays Thorndike skillfully and comically.

The rest of the film is either downhill or full of unrealized potential. Combined with the above positives, My Week With Marilyn feels like a mash-up of a good film and a bad one, since there are so many alternating ups and downs. Eddie Redmayne does alright as Colin, being affable and genuine, but the character is written in a far too stereotypical manner (the young man who wants to be an artist). Colin attempts to romance Lucy (Emma Watson in a role that does nothing but give her some non-Harry Potter screen time), but is turned down when rumors of a romance between him and Monroe surface. This all seems to lead up to nothing but the chance for Lucy to offer the usual line of "you needed to have your heart broken). The same goes for Dominic Cooper, who was also in a vastly superior British period piece An Education. There is nothing for him to do except offer a terribly written warning to Colin not to be seduced by Monroe, given her history of romancing and disappointing men. The role of Arthur Miller (Dougray Scott) comes to its acme when, before he leaves, he crushes Marilyn with handwritten critiques of her acting. This is a major part of Monroe's legacy, her desire for intellectual development, yet the scene is played as a generic insecurity.

The majority of the film's faults lie in screenwriter Adrian Hodges. At its worst, his dialogue is terribly cliched and prone to obvious, "dramatic" declarations of love, opinions, and warnings. These critiques become so much more obvious when balanced alongside some of the well-written scenes. The screenplay could have been superior, but gets weighed down with his need to inject words that are almost insulting to the audience, since aforementioned declarations have clearly been shown onscreen and are not needed to be summarized. Also, the ending title screens mention Monroe's classic performance in Some Like It Hot and Olivier's successful Broadway run and hint that their successes were due to working on The Prince and the Showgirl, even though there's no suggestion in the film that either actor made any real creative breakthroughs. If Hodges' screenplay had been completely terrible, that would have been more understandable. Instead, he did write some hilarious lines and genuinely good scenes, and it's perplexing how the film manages to hold such good and bad developments.

Simon Curtis' direction fluctuates just as much. He ties himself to the screenplay and offers no real personal touches. The ones he does add, however, are fleeting. The filming scenes were actually filmed at the original studio where The Prince and the Showgirl was made, which adds a nice atmosphere of authenticity. Returning to the idea of Monroe's desire for intellectual growth, there are a few scenes that carefully show a copy of James Joyce's Ulysses on her bedside table, and the shots of the English countryside are undeniably beautiful. Otherwise, the movie is shot in a very textbook fashion. His work isn't terrible, but rarely offers any unique atmosphere or production design that blends with the action instead of being a prop to it. And this is a petty gripe, but there are far too many movies that show a character (in this case, early scenes of Colin) being inspired at the movies by sitting in a theater and having his or her face illuminated by the screen.

I always try my best to offer constructive criticism on anything that I review less than favorably. My Week With Marilyn came so close to realizing a lot of potential and so close to exploring famous characters in new ways. It was frustrating to be given a glimpse into something that could have been examined compellingly, only to have the filmmakers quickly move into obvious territory. The biggest error, though, is the constant dialogue that wants to be dramatic and ends up being just as melodramatic as a poor 1950s film. The actors involved are talented, but are unable to elevate the missteps behind the camera. My Week With Marilyn could have been superior, but ultimately feels rushed and pandering. It's worth seeing for its good qualities, but these are too few and far between to warrant a higher recommendation.
at January 04, 2012