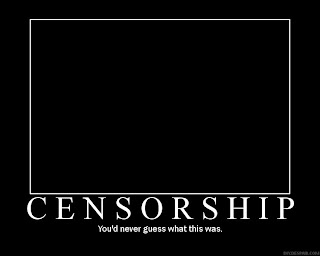 In recent years, via this blog and social media platforms, I've enjoyed supporting Banned Books Week, the annual highlight of excellent literature coming under fire for "questionable" material. I've shared links, I've lent my moral support, and that has been the general extent of my efforts. However, in recent weeks, there have been sobering reminders of the need to consistently support the right to read, not just during a single week in the fall. Two stories have been garnering a lot of attention, and they reflect two different sets of communities, two different sets of problems, and the shared problem of a lack of reading material for students, coming in the form of bans/challenges, and a school district budget cut with underlying political tones. I've been reviewing the various articles, and I genuinely hoped to make honest assessments on my take on the issues. Granted, the image I used above may seem a bit drastic, but I genuinely tried to see both sides of the issue. I'm sure some critics would accuse me of liberally jumping to conclusions, but something is truly amiss in these communities.

"I recently read your statement that the books that were "banned" by the Tuscon Unified School District were in fact not banned, yet are readily available through the district's library systems. However, a Salon article (http://www.salon.com/2012/01/18/tucson_says_banished_books_may_return_to_classrooms/) states that there are few copies readily available. Would you be able to comment on this?

Also, is there any truth to the consistent reports of a crackdown on "politically sensitive" material? If not, is there a reason why the school district has cut the ethnic studies program, for reasons not financial?

I appreciate your time."

I received no reply to this, but I'm sure the district was swamped with e-mails and telephone calls.

Budget cuts are not the same as outright book banning; however, it's telling that the majority of the titles listed were takes on contemporary Mexican-American culture, and that "The book ban is part of a curriculum change to avoid 'biased, political and emotionally charged' teaching, CNN reported." I'm obviously not an educator, and I refuse to make any outlandish assumptions about the nature of Arizona's political stances in relation to their school districts. But cuts to a studies program that focuses on Mexican-American history, a history like any other that has both good and bad happenings, would potentially cut classroom discussions of discrimination and the role of immigrants in this country. Again, that's an assumption, but I find it difficult to comment otherwise when every article I've read takes such a strong stance. The district is vehemently denying the ban, but educators (as quote in the linked article) are distressed over the missed educational opportunities. With such a tense battle in that state, the real losers are the students, when the chance to actively engage themselves in intelligent studies are being denied. Naturally, historical discussions have no choice but to examine the conflicting sides of events and politics. I don't think it's too outlandish to say that a requirement for "unbiased" materials would do away with critical assessments of our country's history in favor of a more sanitary study. But again, even that seems to have gone out the window, since the program has been eliminated altogether.

Via Twitter, I follow the articles and postings of Anna Leigh Clark, an excellent writer, blogger, and journalist based in Detroit. Before I read about the Arizona ban, she posted a link to her own blog posting about a community challenge of the books Beloved (Toni Morrison) and Waterland (Graham Swift)
. I've only read parts of Beloved, and I have not read Waterland, but parents in a Michigan community are attempting to have the books banned because of sexual and violent content. Clark's views of Morrison's content very much mirror what I attempted to convey above in my opinions about the Arizona cuts:

"According to the report from the school hearing, the parents also criticized what they saw as "gratuitous sex and violence in the book." This is startling, given that Beloved is pointedly about slavery, rape, and how state-sponsored human ownership influenced those who lived in its immediate aftermath -- particularly seen in how characters come to terms with living in their own bodies, bodies legally not their own for so long. To tell a story about this era in a way that does not integrate violence and sexuality would simply not be honest."

These are not second graders being assigned these titles (and themes); we're dealing with high school students. The easy answer is to say that high schoolers are likely familiar with notions and depictions of sex and violence. But a move to ban these titles goes much farther. For better and for worse, sexuality and violence are parts of life, and in the context of the two books would undoubtedly lead to (again) debates and discussions about themes that do not fit into tidy, unoffensive boxes. We should applaud readers and students who are undoubtedly able to discuss these ideas logically and openly. What is the point of keeping these books (and by extension, the ideas) hidden? If the books are banned within the school, then they're easily available via bookstores and public libraries. In my ongoing career in bookselling, I applaud teenagers who buy challenging works and express enthusiasm. The point of art is to provoke and educate, and if the parents in this district have their way, I would hope the students would read more because of the uproar. Discussions and debates exist because ideas are not always black and white. My best, most influential English teachers from years past were my favorites because of their emphasis on diverse readings and issues that were stimulating and thought-provoking.

I could go on, but I feel as if I've made my points. This country is in dire need of critical thinkers, and these cuts and bans will have the opposite effect. This is 2012, and I'm saddened to realize that there is still this mythical effort to "protect the children" by doing away with pieces of literature that present real histories and problems. One commentator on Ms. Clark's blog made reference to "explicit materials" and applauded the removal via a blog called "Safe Libraries." I'm sure that a lot of people will roll their eyes at my piece, assuming that I'm merely engaging in knee-jerk liberal outrage. But my overall message is for any students who may stumble across this post: don't be safe. Read whatever you can get your hands on. Think. Debate. Assess. This country will be better for it.
at January 26, 2012