"The Whore of Akron:" Poor Soul 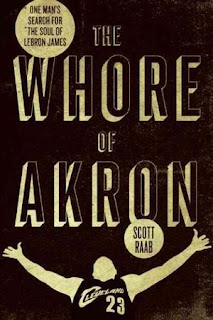 Going into my reading of The Whore Of Akron, Scott Raab's latest book on the affects of LeBron James' 2010 signing with the Miami Heat, I had a feeling that the work would go in one of two possible directions. One of those directions was a sociological and psychological look at the city of Cleveland and the harsh business realities of contemporary professional sports. The second direction, which proved to be all too accurate, especially in hindsight, was a grating, uncomfortable rant against an athlete whom people wanted to deliver a long-awaited championship to Cleveland. I even hoped the book's title would turn out to be a slight exaggeration. To clarify: I'm still a passionate basketball fan, and am genuinely excited that the 2011-2012 NBA season has kicked off. No one team, not even the Miami Heat, is dominating the headlines early into this shortened season. It's an open, even season so far, with clusters of games testing every team, and the usual mix of potential playoff teams exceeding (or receding) on early expectations. Back in July of 2010, LeBron James had a public relations disaster when he announced his signing with the Miami Heat on a nationally televised special, and the Heat pretty much crowned themselves champions before training camps opened. Everyone, myself included, had opinions on this, and now that there's a new season (the Heat lost in the NBA Finals to the Dallas Mavericks), Miami doesn't seem to be getting any more attention than any other talented team. The timing of the book's release seemed appropriate. Enough time has passed for true reflections, but in this case, the emotions are still bitter, and then some.

Raab is a contributor for Esquire magazine, so there is an excellent chance that I've read his work before and just don't recall his specific articles. I've never read anything in that magazine that I've heavily disliked, so I'm sure he has had more than one piece that I've enjoyed, or at least tolerated. The subtitle of The Whore Of Akron is "One Man's Search For the Soul of LeBron James," and the opening paragraph is gripping, giving hints to the very themes I was hoping to read more of as the pages progressed, but the reference to Rebecca Romijn sticks out awkwardly in an otherwise terrific passage, and it becomes a prevailing theme in the book: hints of excellence marred by weird personal flights.

"I no more chose to be a Clevelander and a Cleveland fan than I chose to be a Jew transfixed by leggy shiksas. It is my birthright, my legacy, my destiny. My fate was cast in 1964 on a Sunday afternoon at Cleveland Municipal Stadium, while Canadian gusts swept across Lake Erie and through the mammoth double-decked bowl in damp, endless circles cold enough to stiffen snot. I have seen Paris at dusk; I have prayed at the Wailing Wall; I have behold the twin scoops of Rebecca Romijn's vanilla ass; yet never have I been so transported, never so ecstatic, as on December 27, 1964, when the Cleveland Browns beat the Baltimore Colts and won the NFL World Championship (Raab 3)."

According to the book's dust jacket, Raab is supposed to be one of the last remaining representatives of Gonzo journalism, but while he fixes himself into the account at multiple times, rarely, if ever, does it reflect the atmosphere of Hunter S. Thompson. Thompson wrote about himself at length: his penchant for drugs and alcohol, his love of guns and explosives, etc. But the emphasis was always on his excellent writing, and his personal narratives never distracted from the main themes or topics. And most importantly, Thompson's personal writings were never self-serving. Raab, on the other hand, keeps reminding the reader of his own sordid details: his fluctuating weight; his affinity for his wife's handjobs; his reckless youth marred by a troubled family and years of substance abuse; and so on. If this was supposed to be a memoir, that would be one thing. But right now, nobody would be faulted for forgetting that this is supposed to be about LeBron James. Raab documents his attempts to interview LeBron, and, after some explicit Twitter messages directed toward the player, his media credentials being revoked by the Miami Heat. Yes, James damaged the morale of a troubled city by humiliating its citizens on his TV special. But after pages upon pages of Raab's harsh and downright violent fantasies, LeBron actually comes across like a sympathetic figure, as sympathetic as a savvy multi-millionaire can be. Take passages like this: 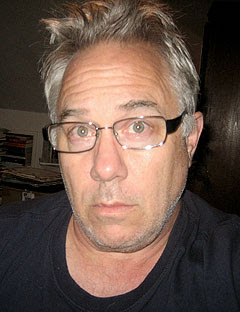 "Enough? Too much. Too much, to ask LeBron to carry a team, and too much to ask him to satisfy the yearning for redemption of millions, and too much--way too much--to ask him to comport himself with any measure of grace or grit in the wake of abject failure. Bad enough? Fucking ridiculous. Our warrior: a feckless child stunted by a narcissism so ingrained that he's devoid of the capacity to respond to failure with even a semblance of manhood. The fans are spoiled? In King James's playhouse, there are no mirrors (Raab 101)."

Raab is trying to play the role of a passionate, lifelong fan of Cleveland sports. He carries around the ticket stub to the aforementioned Browns Championship game. He screams in the press box at stadiums, glares at James during news conferences, and gloats in the player's every misstep. Yes, fans are passionate, and perhaps Raab is trying to highlight how conflicted, lost people find solace in civic community and common ground via professional athletics. But his shortcomings are so documented and examined, in such graphic detail, that one ends up feeling sorry for him, even though he's overcome so much to become a family man and a professional writer. But when he documents passing fantasies of crushing James' skull with a folding chair, said passion becomes everything wrong with the world of sports. The issue of race is touched upon, but only briefly. When Cavaliers owner Dan Gilbert blasted James in an open letter to the city of Cleveland, black commentators likened his anger to that of a slave master. Raab mentions this in passing, but a fascinating, if melodramatic, metaphor that could have yielded excellent discussion is passed by.

There are so many times in the book when there is the potential for journalistic or personal analysis, but said potential goes unrealized far too often. He makes plausible comparisons between tribes (Jewish tribes, ethnic enclaves within the city of Cleveland, and a name even reflected in the Cleveland Indians baseball team), but whenever the glimpse of insight appears, it's quickly lost in shouting and scary bitterness, and these conflicting atmospheres, as with the opening paragraph, sometimes reside right next to each other.

"People living in suburbs flung far from downtown--on both sides of the Cuyahoga River--now drive into the city to see the Cavs and get a bite to eat. They are loud, happy, proud to be part of a city many of them left behind decades ago. They are no longer from Rocky River or Solon or Avon Lake or Chagrin Falls; every last mother's son of them is proud to be from Cleveland, motherfucker. Cleveland (Raab 84)."

Is this entire review messy and lacking transition? If so, I apologize, but it was difficult for me to mentally outline this review, let alone tackle it. It's rare that I read a book that I find to be worthy of such consistent criticism, but this book will only speak to Cleveland fans or people who still harbor resentment towards LeBron James. I'm not defending him: as a Bulls fan, he's an opposing player I love to hate, and after the Heat defeated the Bulls in the playoffs last year, I was happy that Dallas took the championship over the makeshift All-Star "team." But one has to realize that people like Raab have lambasted him since then, and few people have the platform as a writer that Raab has used to offer what promised to be an exploration, but fell into a mess of problems. As I've said before, I'm a firm believer in constructive criticism. I'm not hiding behind a blog or an avatar, and I always welcome critiques of my own writing. What angers me the most about The Whore of Akron is that Raab displays the occasional flash of talented analysis, but willfully chooses to come across like any bile-spewing sports fan. Sports writing is a field that has only a handful of consistently good authors, and there is so much more that this book could have done had Raab calmed down or edited some of his exceedingly vitriolic prose. Leave the blind hate to troll comments on sports websites. Mr. Raab, you've come so far, as you've personally documented. Surely you could have done so much better.