Inside Voices: The Poetry of Paul Auster 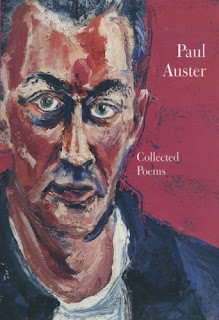 While researching previous essays on Paul Auster, I was reminded of the criticisms he receives. My review of Moon Palace highlights some of the major ones, namely his lack of dynamic female protagonists and his tendency to repeat common themes throughout his fiction. However, since I've read only one of his novels so far, the majority of these critiques are taken from secondary readings. Rare is the writer who lacks personal or creative faults, especially when various writings are open to vastly different opinions. Then again, I'm personally able to take the bad with the good with some of my favorites. I've written many pieces that stress my admiration for the style and philosophy of Jonathan Franzen, yet I've disagreed with more than a handful of his statements. Getting back to Auster, I was perplexed to re-read the words of literary critic James Wood, who likened Auster supporters to dutiful stamp collectors, and in a roundabout way expressed dismissal over Auster's prolific output. The man has written many books. Recently, I was browsing his collection at Chicago's Harold Washington Library, and I scanned titles that I hadn't recalled seeing before. The pros and cons of a vast bibliography seem like new arguments, but ones lobbed at only a select few writers. One could make the case that, for example's sake, Don DeLillo works in similar fashions, with seemingly annual works that occasionally blend themes and settings. Since I have a long way to go in reading the rest of Auster's works, I was fortunate enough to receive a copy of his Collected Poems. I'm an ardent fan of his nonfiction, and more readings of his novels will come in the future. By reading his poetry, I was able to introduce myself to his writings in a different format, and in the process discover new traits (as well as sketches of his older ones).

The selections in Collected Poems span the 1970s, and also include some of Auster's French translations from the late 1960s. Given the fact that these are the works of a young poet (as Norman Finkelstein writes in his introduction, Auster's later poetry was the precursor to his fiction), especially when written in a time of social upheaval, one wouldn't be faulted for assuming that the works would be biting. He does bring the occasional outline of (then) contemporary culture, but the majority of the poems are striking in their combination of thematic simplicity, expanded into complex poetic atmospheres. Subjects and metaphors that can easily be overwrought are presented in sometimes minimal context, hitting their marks and moving on before they have the chance to be redundant or weighed down. The human senses are prevalent, and one of the best examples is the third poem from the collection "Unearth:"

"The blind way is etched
in your palm: it leads to the voice
you had bartered, and will bleed, once again
on the prongs of this sleep-hewn
braille. A breath
scales the wick of my stammering,
and lights the air that will never
recant. Your body is your own
measured burden. And walks with the weight
of fire (Auster 39)."

In a strictly basic sense, I found myself continually reminded of Moon Palace, in that the poems jump back and forth between urban and rural atmospheres, even if the settings are only passing hints. The reader is transported to literally timeless scenes, and sometimes the balance between a poem and its title can hint to both the urban and rural conditions. The easy "answer" is that perception is the same, no matter where one comes from; it's what we perceive that changes, not the actual act. To make more sense of this, the poem "Northern Lights" helps. There is no hint of any outside influence beyond natural phenomenon, therefore making the poem a wonderful moment that could be experienced anywhere.

"These are the words
that do not survive the world. And to speak them
is to vanish

into the world. Unapproachable
light
that heaves above the earth, kindling
the brief miracle

of the open eye-- 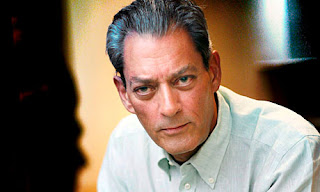 Granted, fiction and poetry, and essays are their own forms. Even with his general lack of well-rounded female characters, Auster has a place as one of the strongest writers of masculinity and male creativity. With this in mind, his poetry is amazingly neutral, and goes back to my aforementioned hypothesis of creating emotions that fit into multiple categories. The strongest theme in his poems is communication, or lack thereof. Voices are stifled, intention is lost, and communication in all of its forms is highlighted in both complexity and the ability to be limited. The emotional looks at love and communication are left open to be potentially uttered by male or female speakers. Given his background and knowledge of the French language, some of the stronger imagery could be broken down as masculine or feminine words, if they were translated into French. But for the most part, disaffection and the struggle to voice feelings are sociological as a whole, and not meant to give one gender more illumination than the other. Finding the best poetic representation of communication in his work is daunting, but some are excellent introductory examples, like "Choral." Also, this is a good example of how Auster continually leaves explicit communication at the end of a poem, making the reader go back to make sense of how it fits into the whole.

"Whinnied by flint,
in the dream-gait that cantered you across
the clover-swarmed
militant field:

this bit
of earth that inches up
to us again, shattered
by the shrill, fife-sharp tone
that jousts you open, million-fold,
in your utmost
heretic word.

Slowly,
you dip your finger into the wound
from which my voice
escapes (Auster 70)."

The collection closes with "Notes From a Composition Book (1967)," a collection of thirteen brief passages in which Auster attempts to make sense of the world and language, and, given the date, to potentially provide potential themes of his future works. Of course, these are not set in stone, and given their brevity, it would be far too easy to pick and choose the most adaptable passages. However, the passages are universal to creativity, and not just Mr. Auster's. Mission statements, hypotheses, representations, and conflicting styles are always present in contemporary writing. Writers and critics champion some forms while disparaging others, and vice-versa. Auster is no stranger to being disparaged, yet the breadth of his work and styles manages to illuminate many themes, or at the very least, open various topics to discussion. His tenth note (cited below) manages to convey this, and as a whole, is hard to argue, since it neatly simplifies the act of writing while still leaving it open to its vast potential. I found a lot of good in his poetry, and while there is still much that I haven't read, I'm happy that these early pieces go beyond what I'm familiar with in his canon.

"The eye sees the world in flux. The word is an attempt to arrest the flow, to stabilize it. And yet we persist in trying to translate experience into language. Hence poetry, hence the utterances of daily life. This is the faith that prevents universal despair--an also causes it (Auster 204)."