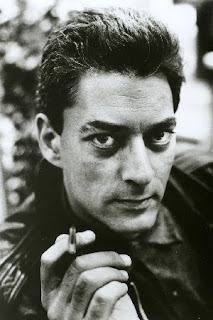 Ever since I was in college, my readings have led me to a particular habit that is both good and bad. It's a long-running tendency to claim affinity for an author based on the merits of a single text. This made for some intense praises when I was younger (see: Chuck Palahniuk) and some pretty safe bets as I've gotten a bit older (see: David Mitchell). As I noted last year, I fell in love with Paul Auster's creative non-fiction book The Invention Of Solitude. I explain my thoughts in full detail in the link above, but his thoughts on the nature of writing and the necessity of solitude were incredibly moving and reflective during a period of time when I lived in Washington state. I've long planned a return to Auster's fiction writings, and no matter what my verdict on his novels, the beauty of The Invention Of Solitude will never diminish in my mind.

I recently finished reading his 1989 novel Moon Palace, and beforehand, I read a profile of Auster in the November 30th issue of The New Yorker ("Shallow Graves" by James Wood).Quite a few of my friends are big Auster fans, but as Wood's essay reveals, there are many readers and critics who don't hold the man in high regard. What I thought would be a review of the recently published Invisible turned out to be a scathing look at the writer, his style, and even his positive reviewers:

"The pleasing, slightly facile books come out almost every year, as tidy as postage stamps, and the applauding reviewers line up like eager stamp collectors to get the latest issue (Wood 85)."

Moon Palace tells the story of Marco Stanley Fogg, a young man growing up in the late 1960s. He has never known his father, and his mother died when he was still a child. He lives with his Uncle Victor, an absent-minded yet loving musician and book collector. After his uncle dies, Marco plunges into poverty and solitude, even becoming a "resident" of Central Park. He's saved from an almost certain death by his friend Zimmer and Kitty Wu, a young woman he meets by chance and ends up with in a relationship. After getting back on his feet, Marco gets a job as a companion (and later, biographer) to an elderly, wheelchair-bound man named Thomas Effing. Effing's history and life reveals adventures, mysteries, and in turn, revelations that clear up some of Marco's own confusions and seemingly forgotten history. After re-reading Wood's essay, I was amazed that he didn't cite Moon Palace. Perhaps Auster's other books are better examples, but every critique and complaint had its place in the uncited text. Here is Wood's description of a typical Auster protagonist:

Yes, Marco is the protagonist, and the novel is written in the first person. Despite his emotions (or sometimes lack thereof) and keen awareness of his own events and surroundings, he feels detached, not so much emotionally, but in a character sense, since virtually everyone in the supporting cast has a history that is just as amazing as his story. Everyone is connected to Marco, even if they don't know each other personally. The two main women in the work are somewhat stereotypical (as Jeff Ignatius commented on my piece "Solitary Pursuits," 'Has Auster written any female protagonists?'). Mrs. Hume, Effing's live-in caretaker, remains in the background, making the occasional appearance to the action at hand, and inexplicably taking the verbal assaults doled out by the old man. Kitty Wu (I cringed every time I read this name in the text) seems to be an early incarnation of Nathan Rabin's "Manic Pixie Dreamgirl:"

"Kitty was the one who finally broke the ice. 'Now that my brother is here,' she said, obviously entering into the spirit of the moment, 'the least we can do is ask him to join us for breakfast.' I wanted to kiss her for having read my mind like that. An awkward moment followed, however, when no extra chair could be found, but Kitty came to the rescue, gesturing for me to sit between her and the person to her right (Auster 36)."

The novel floats between various generations, the American East and West, wild personal histories, family relationships/dysfunctions, and a later manuscript that combines all of these elements (Wood again on an Austerian theme: "A visiting text...is elegantly slid into the host book"). Thomas Effing is either one of the most memorable characters in postmodern literature, or he's one of the most infuriating. With him, some of Wood's complaints are unequivocal. Auster's use of "B-movie atmosphere" is almost the textbook definition of the story of young Thomas Effing.

"He pulled the trigger, and an instant later the man went flying back in his chair, screaming as the bullet hit him in the chest, and then, suddenly, there was no sound from him at all. Effing re-cocked the rifle and pointed it at the second brother, who was hastily trying to scramble out of his bedroll on the floor. Effing killed him with one shot as well, hitting him square in the face with a bullet that tore out the back of his head, carrying it across the room in a spurting mess of brains and bone (Auster 180)."

The bulk of Wood's argument is that Auster's sketches and postmodern usage of cliches are deployed without any irony. However, the more I think about this notion, the more I feel that it's a compliment, at least in the case of Moon Palace. Auster's most blatant wordplays are often explicitly defined and explained in the course of the novel. You probably noticed a very obvious one in this essay: the name Effing. The double meaning is self-explanatory, yet Auster devotes a few sentences of definition. These can be distracting at times, but it seemed as if the hints of irony are being deflated in order to show that the writer is engaged in a strict piece of adventurous, reflective storytelling. For someone like Wood, this can be seen as having one's intelligence insulted.

The biggest distraction, as evidenced in the title, is the use of the moon as a metaphor and a constant presence throughout the work. The moon has always been used in the history of literature, but Auster keeps pointing to it, to the point that any personal meanings or symbolism that a reader could gain from it are lost. It's a classic example of "show, don't tell" rule being broken. Wood may not agree, but there are postives in Auster's fictions, and Moon Palace is no exception. Even if they are a bit sensationalized, his sketches of masculinity are striking and evocative. There's no misogyny here; if the men are assholes, they are unisex in this abrasive behavior. The looks at solitude are especially detailed, even if this acknowledgement blurs the line between the author (since he wrote an entire non-fiction account of solitary moments) and the text.

"I felt like someone about to be reborn, like someone on the brink of discovering a new continent. I watched the counterman go about his business as I smoked another Camel, then turned my attention to the frowsy waitress with the fake red hair. There was something inexpressibly poignant about both of them. I wanted to tell them how much they meant to me, but I couldn't get the words out of my mouth. For the next few minutes, I just sat there in my own euphoria, listening to myself think. My mind was a blithering gush, a pandemonium of rhapsodic thoughts. Then my cigarette burned down to a stub, and I gathered up my forces and moved on (Auster 52)."