The Future Of Baseball: Less Is More

Like many people, I'm anxiously awaiting the start of the 2011 Major League Baseball season, but aside from the anticipation, I've also been thinking about Commissioner Bud Selig's desire to expand the baseball playoffs. Granted, this might seem odd. Perhaps it would be best to focus on the beginning of the season, and not October. However, Selig was hoping to have the expansion in place for this season, but that was thankfully pushed back. Of course, there's a strong possibility that it could happen for the 2012 playoffs. As I've mentioned in some of my previous baseball articles, I'm in no way a purist; as long as the game itself is the same, I'm all for the changes that inevitably happen due to logistics and the passage of time. And the point of this piece is not necessarily to criticize Selig, but to offer my own thoughts as to how a possible expansion of the baseball playoffs could work. Besides, I'm not a stranger to critiques of Selig:

"Another glaring problem is Bud Selig, baseball commissioner. [The 2002 All-Star game that ended in a tie] fiasco proved that he lacks the true baseball mind that is needed to run the league. That is why I propose two people who would be respected, organized, and intelligent baseball commissioners.
The first choice is former NBC announcer Bob Costas. In addition to being a lifelong fan of the game, his book Fair Ball showed that he has astute knowledge of both what happens on the field and off the field. He has some good ideas to help baseball's labor problems, if not to solve them completely. This labor problem is going to take years to fix, but Costas could lay a foundation.
The second choice is journalist George Will. Again, Will is a man who loves the game. He has a keen political mind that would serve the business end of the game. As much as we fans love to think that baseball is just a game, it's really a business, with politics and money being the real bats and balls.
Bud Selig no doubt loves the game, but he lacks the command that either Costas or Will would immediately bring to the job."

I wrote the above passages when I was nineteen, part of a longer article calling for a change in baseball's leadership, and it was published as the featured letter in the April 27th, 2003 edition of the Chicago Sun-Times. Looking back, it's obvious that I was only nineteen at the time (what exactly is a "true baseball mind?" And did I not know how to write a compound sentence?), but I'm semi-pleased that it worked as a sort of bi-partisan appeal (Costas leans to the left, Will to the right). Also, a random reader could assume I was hinting that Selig doesn't love baseball. Obviously, that's not the case, whether viewed through the actual game or the business side: more playoff rounds equal more television revenues and more games. However, that's the problem. 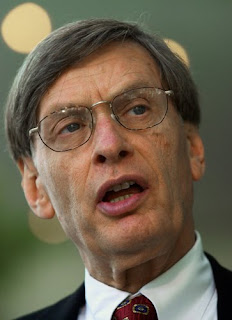 It would behoove Selig to reverse the decision he made following the embarrassing tie in the 2002 All-Star Game (currently, the league that wins the All-Star game gets home field advantage in the World Series). The home field advantage of the World Series should go to the team with the better record. Also, even as a teenager, I hated the rule that every team needs an All-Star representative. Instead, Selig should take a cue from the NBA. Last year, Chicago Bulls point guard Derrick Rose was named Chicago's first All-Star since Michael Jordan in 1998, and the attention he received was extremely well-deserved, in addition to (even if viewed in a nostalgic manner) highlighting the fact that being named an All-Star should be earned on the field, and not by default. For example, I doubt that the majority of Houston Astros fans tuned into the game to see Michael Bourn get his one at-bat.

As much as I love the game, by the time late October comes around, I cannot help but think "Is the season STILL going?" And when the World Series is continually pushed into November, it becomes even more ridiculous. If Selig has his way, a possible second or third wild-card would be added to each league, bring the total number of playoff teams to either ten or twelve. This would mean another round (or two) of playoffs before the League Championship Series and the World Series. The current format (three division champions and one wild-card for each league) has been ridiculed since its inception in 1995. But then again, when the season was expanded from 154 games to 162 in 1961, that was criticized heavily before it became accepted.

I don't think that expanding the playoffs would cheapen baseball, but something has to be done about the length of the season, both the regular season and the playoffs combined. In my opinion, this is how a baseball season would work:

1.) I applaud baseball executives for starting the 2011 season right at the beginning of April, and hopefully this will continue. However, I would prefer to see the season cut to 158 games. This way, the season would end in the middle of September, and there's no reason to not have the playoffs start the week after.

2.) I prefer the current playoff formats, and let's assume that it doesn't get expanded. It would make sense to keep the best-of-five divisional playoff format, and while this may be a stretch, baseball could go back to its original LCS roots and revert to the current American and National League Championship Series to a best-of-five, rather than a best-of-seven.

3.) After the NLCS and ALCS, the pennant winners would take a week off, and the emphasis would be on the World Series. This is taking a cue from football, which does an excellent job of building to the Super Bowl. Yes, this would drastically cut down on the number of playoff games, but would add potential excitement to a playoff system that, even for the most diehard baseball fans, tends to drag on too long. The World Series would still be played under the best-of-seven format, and would end in the middle of October, instead of flirting with November. Even with these rules in place, another round of playoffs could be added, but would still keep the postseason within the confines of September and October. Selig's current problem is that he thinks nothing about baseball going past October. By reverting the format of the LCS to a best-of-five, I cannot imagine that any television revenue would be lost, since the series in either league rarely goes to a seventh game.

I'm not trying to focus on the negatives. Overall, I'm as excited as always to see the start of the season. However, Selig is taking steps back when he thinks that he's taking steps forward. He's entirely right to be thinking about expansion, but the fact that baseball has a longer season than any other sport, it's odd that he's not taking these simple subtractions into account. Shaving a few games off the schedule would create immense room for a logical playoff increase, and would bring back the reverence for the World Series that seems to have been lost. I'm sure that I'm overlooking some logistical problems, but I think that my ideas would appeal to both purists and the natural progression of baseball.

Now that I have these concerns written and out of my head: Play ball!
at March 28, 2011