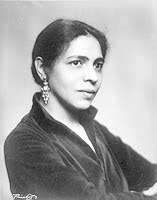 "As long as I appeared to ignore insult and injury, I was a martyred hero to a lot of people...But the minute I began to sound off--I became a swell-head wise-guy, an 'uppity nigger.'" --Jackie Robinson

Even before this month began, I wanted to devote at least one post with a nod towards Black History Month. I went through a lot of potential options, from a look at Spike Lee's Do the Right Thing to readings in black non-fiction or classic fiction like Ralph Ellison's The Invisible Man. I'm not saying that I won't return to these ideas in the course of the year, and, obviously, any kinds of cultural studies or looks at black creativity shouldn't be limited to the shortest month of the calendar year. However, the more I thought about it, the more I had the urge to return to the fiction of Nella Larsen. Last year, I gained a lot from my reading of her 1928 novella Quicksand, and I made a note to return to what is generally considered her masterpiece, the 1929 work Passing. I took a black literature course eight years ago, and our reading of Passing was limited to some select passages. Having just read the work in its entirety, it's amazing to realize how much I had lost in that time.

Passing revolves around the intersecting lives of two women, former childhood friends who meet years later by pure chance. Clare Kendry is a black woman who has spent most of her life passing as a white woman, going so far as to use this to her financial and social advantage, marrying a well-to-do white man who happens to be racist. Her friend, Irene Redfield, is equally comfortable, but fiercely proud of her race, and married to a black doctor. She has the ability to pass too, and is seen doing so at the beginning of the novella, passing in order to get a table in a hotel restaurant. Clare, at least at first, enjoys her ability to pass in the white world, and doesn't seem to dwell too much on the disaster that would be her husband finding out about her true identity. Irene is both intrigued and dismayed by this, and her problems with her own husband become much more apparent as she is both repelled and drawn in by Clare's seductive nature. Brian Redfield is occasionally stubborn and mocking of his wife's problems, an adjective that is used multiple times in descriptions of his dialogue. These issues add up and continue the exploration of the problems examined in Quicksand, analyzing how black women of the time had to deal with both racism and the stirrings of feminism.

"Then why worry? The thing, this discontent which had exploded into words, would surely die, flicker out, at last. True, [Irene] had in the past often been tempted to believe that it had died, only to become conscious, in some instinctive, subtle way, that she had been merely deceiving herself for a while and that it still lived. But it would die. Of that she was certain. She had only to direct and guide her man, to keep him going in the right direction (Larsen 218)."

As the meetings between Clare and Irene become more constant (it would be a stretch to call it a true rekindling or friendship), the problems between the women become even more pronounced. Clare is dangerously leaving herself vulnerable to being "discovered" as black, and the more wary Irene grows, the more she herself grapples with the idea of "outing" Clare. In an early appearance, Clare's husband shows a violent hatred for the black race bubbling below his already racist beliefs. Not only would Clare be ruined, she very well would have her life in danger. Brian Redfield's actions don't help, as he takes a not-so-subtle liking to the beautiful Clare. The previous notion of "outing" takes on its more common trait, as Larsen's prose skillfully addresses what could be further romantic complications.

"But that was as far as she got in her rehearsal. For Clare had come softly into the room without knocking and, before Irene could greet her, had dropped a kiss on her dark curls.
Looking at the woman before here, Irene Redfield had a sudden inexplicable onrush of affectionate feeling. Reaching out, she grasped Clare's two hands in her own and cried with something like awe in her voice: 'Dear God! But aren't you lovely, Clare!' (Larsen 224-225)."

I don't remember the text in question, but I remember another college course in which, when asked about possible homosexual undertones in a passage, the professor made the honest point that the occasional "queer reading" can be misapplied to a given work. However, I believe that Larsen's intention here is to highlight a possible attraction between the two women. Whether this was due to the times or Larsen's intent to keep the primary focus on race instead of sexuality, nothing about homosexuality is rendered explicit. However, given her clear intelligence and ability to highlight varying social issues, it would be hard to imagine a writer not even assuming the secondary meanings. The fact that Larsen is so amazingly blunt about the racial problems doesn't mean that she couldn't have hinted at something more. These, of course, are merely opinions, lest I commit the fatal mistake of assuming a dead writer's true intentions. But then again, being a black woman was hard enough then (as it is now); being a black lesbian would have been an even bigger obstacle, not that Clare and Irene have anything easy to come by in their lives.

In my essay on Quicksand, I wrote that Larsen "opts to shout the problems of early 20th century America as loudly and clearly as possible." In Passing, this idea is no different, and the similarity between the two texts is striking, especially given that the later work is remembered so much more than the earlier one.

"[Irene] said: 'It's funny about 'passing.'' We disapprove of it and at the same time condone it. It excites our contempt and yet we rather admire it. We shy away from it with an odd kind of revulsion, but we protect it.'
'Instinct of the race to survive and expand.'
'Rot! Everything can't be explained by some general biological phrase' (Larsen 216)."

And, with one simple citation, we can see why Passing is much more remembered. While the previous work did deal with equally strong issues, the saga of Clare and Irene is injected with a lot of issues that could either be ambiguous or painfully clear. The notion of "passing" is both hated but, as Irene's husband says, instinctual, no matter how low it may appear in today's view. At the time, as proud as many people were of their race, the bitter reality of the time meant that, if one could pass, it was at least an option for humanity in the face of a racist society. These ideas are partly why I found the Jackie Robinson quote to be so relevant. When he made his debut in the major leagues, he had an agreement with Branch Rickey, the owner of the Brooklyn Dodgers, to spend his first two seasons refusing to fight back against slurs or physical violence. Rickey told Robinson that he'd be absolutely justified in fighting, but that any possible melees would kill the goal of desegregating baseball. After this agreement, many members of the white press criticized Robinson for speaking out against anything. In the 1920s, the time of the writing of Passing, any speaking out against the mindset of the times would have done more harm than good, no matter how justified the black community would have been.

Of course, I'm more or less just stating the obvious as studied from history. As I believe I've mentioned in previous posts, as a white male, I have no true understanding of any of the issues faced in the black community, either past or present. However, using an author like Larsen as a point of reference, there are many avenues of further study, both sociologically and historically, especially in the realm of literature. Another full essay could be devoted to the famous ending of Passing, with its shocking actions and ambiguities, but I feel that what I've touched on here gives the best insights into what the text was trying to highlight. There are times when ambiguity in literature can be fatal, but in this text, it leads to a lot of satisfying thoughts and issues.