The Heart Of the Matters 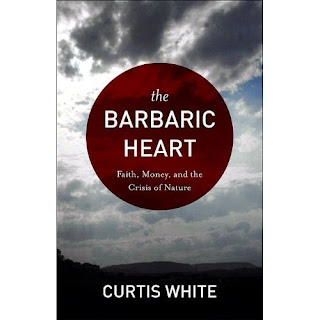 The current economic and ecological crises are, to put it mildly (not that one should), problematic in more ways than one. These issues are visible in a few ways, one of which is the understanding that everyone, qualified or otherwise, has his or her own solutions, opinions, and occasional agendas. The rise of political divisions in the United States, coupled with the Information Age, has made analyses, critiques, and news almost literally dizzying. I've never been a fan of soundbites,especially ones that are intended to be substitutes for actual learning. However, more in regard to the economic/banking collapses, I've found myself relying on the most basic definitions and summaries. Despite having read numerous articles (thank you, James Surowiecki--I follow you as best as I can), I'd probably fail a simple economic vocabulary test. These admissions aside, I was excited to read Curtis White's The Barbaric Heart, an almost too-brief, stern look at our current mindsets on these issues, written by a self-admitted non-scientist/economist.

The staggering number of books on these problems would probably make even the most dedicated reader wary of a new publication, even one penned by an expert. However, as indicated by his 2003 masterpiece The Middle Mind, White is an intellectual force who, sometimes by sheer will alone, makes hypotheses that are stunning and accurate. He leans to the left, yet is one of those rare voices unafraid (or, more accurately, insistent upon) of lambasting people on either side of the political spectrum. In The Middle Mind, he states that a lack of true thought and ingenuity is dangerously killing the American imagination; in The Barbaric Heart, extensions of these mind faults could end up literally killing us.

To highlight this, he uses a metaphor that may seem obvious at first glance, yet reveals a lot more with a little definition:
"The rhetoric task that confronts the Barbaric Heart is to persuade us that there are times when crime becomes a necessity. This is usually the job of politicians, the perennial flaks for barbaric purpose. The 'virtue of necessity' is also the argument of Cold Warriors, who discover that in order to confront evil (fascism, communism, Baathism, the villany du jour) they must become a little like it (White xviii)."

This notion of a barbarian goes beyond the violent acts of plundering and pillaging; it highlights the scary realization that despite the grave error of those ways in modern understandings, the participants feel that they are doing good when in fact they are doing the most evil and damage, whether this be to civilians or to the actual environment. Applying the metaphor to today's climate, this mentality doesn't mean the destruction of villages, but the utter decimation of our economy and surroundings. White asserts that it's easy to criticize corporations and the almost mythical idea of greed, but he stresses that they are not fully to blame. Everyone, from corporations to individuals, needs to completely overhaul their lifestyles and understand that much more is needed than good intentions and a coat of green paint.

"Corporations are mostly powerless to be anything other than what they are. I suspect that far from being perverse merchants of greed hell-bent on destruction, these corporate entities are as bewildered as the rest of us...[they] simply have other priorities that are to them not only duties but virtues. They are the ancient tragic virtues of the Barbaric Heart (White 42-43)."

Another stunning theory by White is the revelation that even the most dutiful environmentalists and recyclers are fighting a losing cause, since to truly see any changes in the destruction of the planet, the corporations would have to completely and systematically change how they go about their business. But, as he implies, even the most ardent supporters of a green economy have a lot of soul-searching left to do.
"Environmentalism in the United States has the habit of looking outward to the corporate and political culprits it wishes to defeat, as well as to places it wishes to preserve, and the institutions and organizations it hopes will help it. But it too rarely looks inward to the fact that what precedes environmental degradation is the debasement of the human world (White 55)."

To highlight his opinions, White follows the same route that he did in 2003, citing an excellent range of historical and literary texts, from Edward Gibbon to Walt Whitman. To escape this human suicide, he urges people to go back to the basics, to embrace ideals that come from sources that may not be obvious sources of environmental solutions: philosophy, the arts, and religion. Thankfully, he doesn't support or name any specific religious philosophy, but mentions it as a whole as a way to shake people out of their complacency, understanding that religion has such a hold on a lot of people. In order to get more people thinking about solutions, even a religious twist would be beneficial.

"What we need is to begin working toward an alternative to capitalism that, as many have argued, functions as a no-growth or steady-state economy. And in very limited ways the new emphasis many communities are placing on 'local' economies and on walkable cities is already doing this. But I don't believe that we can get to this non-capitalist place without also providing for a mode of thinking and being in the world that is, I don't have a better word for it, spiritual but spiritual with no illusions (White 157-158)."

As was the case with The Middle Mind, White's arguments and critiques are effective because, despite his goal of being somewhat insulting, they are done with the intention of igniting debates and thought, rather than the usual political oratories of shouting and intelligence insults. He wants people to be more intelligent, and metaphorical slaps in the head are needed sometimes. His writing style is a sly combination of humor, dutiful reporting, and academic flourishes, all in the name of optimism. His obvious understanding is that not everyone will agree with him, but with any call to action with environmentalism, something needs to be done, and quickly at that. Sadly, we may not be ready to change our ways of life, or may do so when it's too late. This closing citation may be depressing, but hopefully writings like these will shake us out of our hand-wringing and lead to positive changes in the world. I also find it to be equally defining of both sides of the environmental issue, both the people who feel that they're doing what they can to combat it, and the people who claim that it's a myth and mere scare-mongering.

"The Barbaric Heart is a pure emptiness, an emptiness that doesn't know itself as empty. It is an emptiness that has turned upon itself. It is a moral black hole. It is a mouth that chews. It eats what comes before it. It is a self-destroying hunger. It is a permanent state of war against all others but also, most profoundly, against itself. One part violence, one part plunder, and eventual anguish and regret (White 15)."