Two weeks ago,my girlfriend and I moved from Chicago to Lafayette, Louisiana, as she prepares to embark on her PhD studies at the University of Louisiana. While this is an exciting new phase, in a fantastically different landscape from the Midwestern lives we've been used to, there's also the challenge of immersing myself in a new literary community, one concentrated in what feels like a small town (in reality, Lafayette is the fourth biggest city in Louisiana, I believe; in addition to the University, there's a beautiful downtown and fantastic restaurants sprinkled in unexpected areas off the main roads).

I'm going to be teaching two English composition courses at the university, and once I get into that groove, and once we explore the city (and hopefully nearby New Orleans in due time), the transition will feel more complete. For now, though, I still feel pang of homesickness, and I remember why I started this blog in the first place: back in 2008, I impulsively moved to Washington state, and thought this would be a log of new landscape experiences. Instead, it turned into a film and book review blog, and the upkeep of this site led me to renew my focus on creative writing. Eight (!) years later, I have my MFA, I have a novel draft that's almost ready to send out (Hi agents! Hi publishers!), and I'm about to start teaching at the university level.

Where am I going with these ramblings? I've neglected this space pretty heavily over the last three years, updating sporadically, mainly showcasing my publications when they happen. I don't want to make any goals on how I'll dust off this blog, but I'd like to start with a piece of writing I recently unearthed. Back in 2013, I had to do an interview as part of a creative nonfiction assignment, and I reached out to Chicago writer Ben Tanzer. I'd read his work, loved it, and found him to be gracious and hilarious on social media. To my surprise, he readily agreed to take time and meet with me. Little did I know that I'd end up doing readings with him, and fostering what became a genuine friendship. In 2015, we read together for the book launch of Steve Karas' Kinda Sorta American Dream. After, we went out for drinks, and Ben insisted I ask him whenever I had questions about publishing, writing, or life in general. It doesn't matter if I end up moving back to Chicago or just end up visiting sporadically. Ben will always be a warm link to Chicago for me, and I'll always be grateful for his guidance as I stumble toward life as a professional writer (whatever the hell that means). So here's the transcript of my first meeting with him. I've edited parts (mainly to clean up some bad writing of mine), but almost three years later, I think this reveals some good ideas. Thanks, Ben.

Also, Ben has a new book out: Be Cool is now available from the great people at Dock Street Press. So if you'd like, read this and then order the book from your favorite independent bookseller. 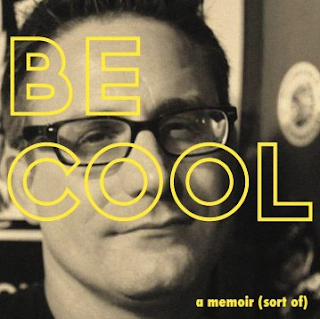 The rise of social media has made it possible to blur the definition and distinction of "stranger." Last fall, I became acquainted with Chicago writer Ben Tanzer after I read and reviewed My Father's House, a novella published by Main Street Rag. Mr. Tanzer shared my review on his website and his social media feeds and sent me a thank-you email for my review. Since then, we've followed each other on Twitter and have been Facebook friends without actually meeting in person; however, I've met him twice in the last week.

I attended a book launch last Saturday at City Lit Books in Logan Square for Friend.Follow.Text., a collection of stories about digital culture, and Tanzer read his excerpt. The previous week, he agreed to meet with me as the subject for this interview, and I talked to him after the reading. We finally introduced ourselves, and actually had proper faces to put with our social media handles. We met the following Monday at the Starbucks on Wabash and Jackson. I wanted to interview Ben for a variety of reasons. In my opinion, his fiction explores contemporary masculinity in complex ways, not shying away from negative aspects. This is a subject I want to explore more in my own fiction and creative nonfiction writings.

Tanzer is interested in twenty-first century men, but he explained to me that he wants to write stronger female characters. This is yet another idea that I've been conscious of in my own work. With Tanzer, he explained this need not with any grand social meaning, but out a necessity for male writers to make sure they're not just exploring their own views and sensibilities.

Tanzer is very active on Facebook and Twitter, which ties nicely into his inclusion in the Friend.Follow.Text. anthology. He also maintains a blog and website, devoted to publicizing other writers and books, in addition to sharing reviews of his own work. However, he maintains a strict distinction between marketing and writing, saying "I would never market [myself] instead of write." I also asked him about his online persona. His blog is called This Blog Will Change Your Life, and online, he maintains a steadily sarcastic, hop voice. In real life, however, he's polite and expansive in his answers. He started the blog back when, in his words, "nobody was blogging," and he wanted to create a mini-universe and tongue-in-cheek "media empire," making it a fake corporate blog. This backfired on him at one point: an unnamed writer, upon reading Tanzer's debut novel, was disappointed that the book didn't literally change his life. He wrote a long complaint to Tanzer, who was perplexed that anyone could confused a literary work with an obviously satirical website.

My work with Longform.org has helped me familiarize myself with small presses and independent journals; that's how I discovered Tanzer in the first place. I stumbled upon his short story "The Gift," published in The 2nd Hand, after a random Google search for local journals. I asked him how he views the sheer number of places for writers to publish their work, both in print and online. He believes it's very good for writers, since it gives them wider audiences and readers. For readers, however, Tanzer maintains that the volume is good and bad. There are a lot of journals that publish work of poor quality, and the amount of reading available is such that one can never read everything.

This brought me to the final question of my interview. Tanzer is married with two boys, works full-time doing social media work for a nonprofit, and finds the time to write a variety of stories and novels (Orphans was released this week, with a starred review in Publisher's Weekly), in addition to reading a staggering amount of outside fiction. He's very strict about his time.

"If my wife and kids go out unexpectedly, I never look at it as 'oh, I have half an hour to myself to sit on the couch and watch TV.' I made it my writing time. I strip the fat out of my day." I asked him about this because I find myself daunted with my school activities and my day job, but Tanzer believes that, no matter how busy one is, there is more time in the day than most people realize. He makes his day segmented, balancing his outside responsibilities with his duties as a reader and writer.

This interview wasn't conducted out of a need to research a specific topic, but it was done because Tanzer represents so many intangible ideas that come up in my writings and research. I wanted to get his opinion on these ideas-masculinity, time management, and independent journals- because, combined, these make up the vast majority of my interests. For as familiar as I am with independent journals, I wanted to hear a new take on their numbers and qualities. And most importantly, I believe this interview has given me a new contact within the literary world; while Mr. Tanzer and I have been in touch over the last year, he's always been quick to answer my messages and questions.

He closed the interview by insisting that I email him with any further questions or to set up times to meet for coffee and more discussions. This was a genuine offer, and I'm confident that, should I need an outside opinion on creative matters or subjects, I have someone I can reach out to for insights and guidance. This will prove to be very valuable during the course of my MFA candidacy. So while I'm still considering various creative nonfiction projects, this interview provided me with an excellent face-to-face with a writer who touches upon my concerns.