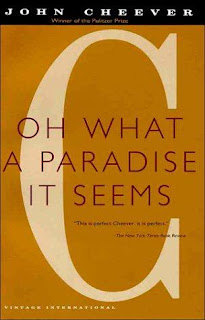 Oh What a Paradise It Seems, a novella that proved to be John Cheever's final published work of fiction, is admittedly a strange starting point, especially when placed next to his much more esteemed bibliographic selections. Perhaps I should be embarrassed that it has taken me this long to get around to him, or perhaps I would have been better off beginning with The Stories of John Cheever, which I've owned for a few months. As for novels, Falconer is his most acclaimed work. I was at a community yard sale last month, and the final house had by far the best collection of 'for sale' books: Cheever, Gabriel Garcia Marquez, and a giant anthology of Japanese stories. I began reading Oh What a Paradise It Seems on a whim, but then I realized that beginning with a "lesser" work might be better in the long run. A natural inclination is to begin an introduction to a given writer with the most highly praised pieces, but what's the harm in beginning from the edges? If his other works do prove to be much better, then they may be that much more satisfying.

Oh What a Paradise It Seems is nothing if not ambitious, even for such a slim volume. It opens with Lemuel Sears, an older New York man taking a trip to the small mill town of Janice (named after the original mill owner's wife) to skate on Beasley's Pond. His daughter lives in the town, and Cheever sketches the surrounding areas with a mix of old-time nostalgia and then-contemporary observations (the town has no fast food restaurants due to a corporate computer glitch). Afterward, a vast assortment of subplots come into play: Beasley's Pond becomes an environmental dumping ground; Lemuel begins a torrid affair with a younger woman, a relationship highlighted by confusion, elusiveness, and a lead-in to a homosexual fling; and two of the families in Janice begin a feud that culminates into public showdowns. Major events are also presented, almost as asides: the murder of a dog, the accidental abandonment of a child, the murder of an environmental scientist, and acts of local terrorism. These are all blended into an otherwise standard narrative, which, given the plot points recapped above, may seem impossible, especially since the novella runs for only one hundred pages.

In addition to the numerous happenings, Cheever manages to expand upon various ideas, to the point of going off into wild tangents. None of them are exactly distracting, nor do they take away from the regular narrative; then again, with a close reading, a reader has to wonder where exactly Cheever intended to go with the narrator's hypotheses. The passage below is a good example. The book is rife with potentially biblical references, yet more often than not veer just slightly into other ideas.

"At the north end of the town was Beasley's Pond--a deep body of water, shaped like a bent arm, with heavily forested shores. Here were water and greenery, and if one were a nineteenth-century painter one would put into the foreground a lovely woman on a mule, bent a little over the child she held and accompanied by a man with a staff. This would enable the artist to label the painting 'Flight into Egypt,' although all he had meant to commemorate was his bewildering pleasure in a fine landscape on a summer's day (Cheever 4-5)."

There is undeniable beauty in the passages. The beauty of rural life is depicted with the sameness of urban life, and while this may seem like an obvious literary trope, Cheever handles it with careful phrases, and ultimately, both settings end up being equally critiqued and praised.

"The offices where she worked struck him as being characterized by a kind of netherness. They were on the nether floor of a nether building in a nether neighborhood, and when he entered the place he saw nothing that was not distinguished by its portability. The reception room decorated with a vast urn, filled with artificial grasses and weeds, the receptionist's desk, the receptionist herself all seemed highly mobile as if they could be moved, at short notice, to another building, another state or even another country (Cheever 13)." 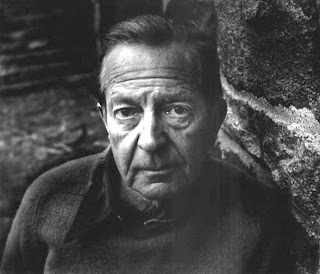 With even the most basic knowledge of John Cheever's background, it's easy to see Lemuel Sears as an autobiographical reflection, and it's almost impossible not to be moved. In the years since Cheever's death, biographies and published letters have shown him to be conflicted by feelings of inadequacy, especially in his sexual makeup as a closeted bisexual. I have a tendency to mention this too often, but a rule of thumb is to never confuse the author with the text. However, given that Oh What a Paradise It Seems was composed near the end of Cheever's life, the text has potential insights into his state of mind, whether he expected it to be apparent or not. The textual sketches of homosexuality are outdated (the work was published in 1982), but seem consistent in attempts to explain it.

"'Your male lover is a traditional invention of the neurotic,' said Dr. Palmer. 'You have invented some ghostly surrogate of a lost school friend or a male relation from your early youth (Cheever 60).'"

Even with sometimes outdated reflections, Cheever does manage to create some very timely sketches, especially later in the novella. A hearing is set for the state of Beasley's Pond, and an argument erupts between the town's mayor and Chisholm, the environmental scientist. It's a strong balance of ideas, and mirrors today's political battle between environmental woes and a conservative political landscape. In one extended diatribe from the town's mayor, an entire cycle of American problems comes to light, and it's very tempting to visualize the mayor as a composite of today's GOP candidates. Perhaps I'm going out on a limb, literary-criticism wise, but the passage should back up this claim.

"'I haven't finished,' said the mayor. 'I've described this meeting as a courtesy, and I've encountered nothing but troublemakers. You, Mr. Chisholm, have, I happen to know, never served in the armed forces of your great country and you have no understanding, of course, of our wish to raise a memorial to our patriotic dead. You would like, I know, to prove that our fill in Beasley's Pond is comprised of leachates and contaminants. My father was an honest Yankee fisherman. He was a soldier. He was a patriot. He was a churchgoer. He was the husband of seven healthy and successful children. If I spoke to him about leachates and contaminants, he would tell me to speak English. 'This is the United States of America, my son,' he would say, 'and I want you to speak English.''Leachates' and 'contaminants' sound like a foreign language, and to bring governmental interference into our improvements of Beasley's Pond is like the work of a foreign government (Cheever 90).'"

I haven't touched upon the entirety of the plot, as I mentioned in the opening summary. None of the themes are loose ends; everything ties together, even if the ties are somewhat forced or rushed. Again, for all of this to be packed into a novella is a strong feat, but there are some limitations. Cheever keeps the scope of the work open to a diverse list of potential meanings, and even though there's value in the problems of the characters, there's a nagging sense of a writer, even one as prolific as Cheever, trying to do too much with limited space. It's easy to make assumptions, much like I did with the linking of possibly autobiographical themes. However, was this the work of someone who knew he was dying? Was it an attempt to create a small capsule of contemporary life? There is much to consider in the pages, but for me, satisfaction came from analyzing the themes individually, rather than as interlocking parts. Cheever's Wikipedia page states that the first reviewers praised the work with the understanding that Cheever was dying. With this in mind, the praise is warranted, not in a patronizing manner, but for the attempt to explore numerous sociological and psychological elements in a limited space. I'm going to return to his earlier works in the near future, and it should be fascinating to see the differences between the writer as a young man and the writer as someone making a final statement.

Thanks for posting this intelligent discussion of the book. I heartily encourage you to read that great "Stories" volume, the "big red book," as I always called it. The beauty of Cheever's writing has few rivals in American literature, and without question the short story is his genre. It's a shame that he is not yet fully appreciated as one of the great American short story writers. Enjoy 'em all, but may I put a special asterisk next to "The Country Husband," "The Swimmer," "O Youth and Beauty!" "Goodbye, My Brother," "Christmas is a Sad Season For the Poor"...I guess I should stop. Great post.

Thank you for the kind remarks, and recommendations are always welcome. I'm definitely going to get around to his short stories very soon; I know they were Cheever's bread and butter, and from what I understand, the themes are sometimes different than his novels.

I keep hearing 'The Swimmer' mentioned...I may read that one first before moving along to the others. Hopefully I can squeeze some (if not all) in before the end of the year.