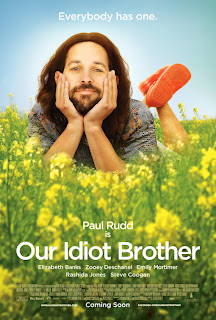 Jesse Peretz's Our Idiot Brother is one of the most genuinely enjoyable films to be released this summer. On the surface, this is an impressive feat, since the majority of the film is a mix of plot lines, characters, and developments that have been done numerous times, in a variety of ways, both good and bad. A family's black sheep member returns home and wreaks havoc. Seemingly successful people have problems and limitations. Integrity and success are found to be conflicting interests. Plot twists and climaxes can be seen a mile away. Now that these "faults" are out of the way, the positives come into focus. The truly "original" film is a rarity, so even with often-used tropes, good writing and acting are essential. Our Idiot Brother has both, and while it does have the occasional limitation, the actors make it extremely enjoyable.

Ned (Paul Rudd), is an eternally optimistic hippie, working with his girlfriend at a biodynamic farm. At a farmer's market, he listens to the pleas of a uniformed police officer and is duped into selling him weed, and thereby being arrested. After being released from jail, he goes back to the farm, only to find that his girlfriend has taken up with a new man and even keeps his dog out of spite. Believing that he needs to save up money to rent space in a goat farm on the property, Ned returns to his mother and sisters. Miranda (Elizabeth Banks), a journalist for Vanity Fair, is on the verge of beginning her first major interview. Natalie (Zooey Deschanel) is a spoken word performer, conflicted about her commitment to her girlfriend and her attraction to a young male painter. Liz (behind Rudd, Emily Mortimer has the best performance in this film) has two young children and is struggling with a strenuous, sexless marriage with Dylan (Steve Coogan), a snobby documentary filmmaker. Ned lives and interacts with all of his sisters for various lengths of time, and their desire to help him out leads to individual conflicts. He gets along fabulously with his nephew, but Liz and Dylan look down upon Ned's influence, especially since they're trying to raise an impossibly cultured child. His complete honesty leads to tension between Miranda and her unspoken love for her neighbor, Jeremy. A misunderstanding about Natalie's confession to her girlfriend completes the family's strain. When added to his ex-girlfriend's stubbornness and an off-hand remark to his probation officer, Ned must use his simple life philosophies to help bring closure and understanding to everyone.

For a long time, I've believed that Paul Rudd is one of the most underrated actors working today, and a testament to his skills is his ability to help elevate what could be substandard material. A role as an optimistic hippie has unbelievable potential for hamming, yet Rudd manages to make Ned lovable and, most importantly, believable. Even in the most dire circumstances, none of his actions are malicious. Honesty is his best policy, and his lack of living in a regular day-to-day world is his only fault. He is continually called out on his openness, but his comments and interactions are genuine; usually, when a film character is described as "brutally honest," that means dick jokes or mean-spirited dialogue in inappropriate scenarios. Ned just wants to foster open communications, and he doesn't live life as a means to hiding true beliefs. He's not a man-child, either. His interactions with his nephew are the few times that the child is able to act like a regular kid, and in the film's biggest outburst, Ned puts his sisters in their place, showing an understanding of their situations that belies his usual goofiness. With a warm smile or an understated piece of dialogue, Paul Rudd makes Ned a combination of excellent qualities, just in the wrong situations.

The roles of Miranda, Natalie, and Liz are very strong, but also seem to be heavily influenced by the films of Woody Allen. On the surface, these are stock female characters: the career woman (Miranda), the creative younger sister (Natalie), and the modern mother (Liz). Add Dylan, the cheating, conniving brother-in-law, and the women in Our Idiot Brother could be a mixture of the women in Hannah and Her Sisters and Interiors. During one of the film's climactic scenes, the three sisters sit down with the intention of discussing Liz's predicament, and it turns into an argument over their personalities. It's a relatively tame scene, but does mirror some of the dialogues Allen has employed in his earlier works. These are not rip-offs at all, and are too fine-tuned to be coincidental. If the sisters were intended to work as a homage to Allen, it works quite well. (Note: the following hypothesis is not mine, but an extension of a point made by my friend Eric) Natalie's bisexuality, and Ned's comic interaction between a sexually open couple are important plot points, but are also admirable uses of homosexuality in a manner that doesn't make the sexual orientation itself the butt of any jokes, but rather, like all sex and comedy, it leads to extensive comedic scenarios. Woody Allen has been criticized for the lack of gay characters in his film worlds, so it's a commendable nod to Our Idiot Brother's writers. The film works as nod to another screenwriter, but with their own flourishes. 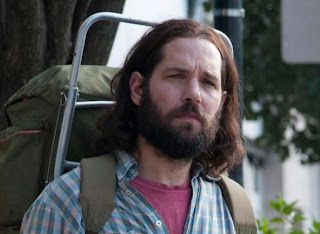 The film was written by Evgenia Peretz and David Schisgall, and the two have done an admirable job. The transition between the comedic and the dramatic is sometimes uneven, and while none of the conflicts are left unresolved, Our Idiot Brother ends obviously, with seemingly happy endings for all of the characters. However, going back to my opening, everything is handled well. Even with shaky transitions and closure, the resolutions aren't preachy or insulting. The dramatic scenes are not overdone, and the comedy never veers into unnecessary gross-out humor or slapstick. The funniest lines in the film are the most casually uttered ones, and are only quotable to people who have seen the film. A common mistake with novice screenwriters is the belief that humor has to be obvious or highlighted; here, it's blended and occasionally requires attention to pick up on the nuances. Therefore, the writers do a fine balancing act, making the rare unrealistic scenes seem plausible. Nothing is overdone, and for first-time screenwriters, everything is handled well. Peretz doesn't add any flourishes to his direction, but sometimes the best directing is the type that isn't immediately noticeable. The script and the actors handle the work, and there's no need for any obvious cinematography or flashy camerawork.

Our Idiot Brother is a highlight for everyone involved. Rudd continues to be enjoyable and charming, and can elevate even a terrible movie (which this is not). I've always enjoyed Elizabeth Banks, and her acting, like that of Rudd, is a continually strong balance between playful and serious. Is this the best comedy ever made? No, but it doesn't need to be. The diverse cast does exactly what's needed, and the film could even reveal more comedic highlights after multiple viewings. It's an excellent example of an above average film that gets the most out of average expectations, therefore being entertaining without stooping to insult the audience or relying on stupidity for laughs. It's been playing for a week and might need time for more word-of-mouth recommendations. I highly recommend it for people who enjoy smart comedies. People who go into it expecting stupidity and obvious laughs? They'll be very pleasantly surprised.
at September 05, 2011