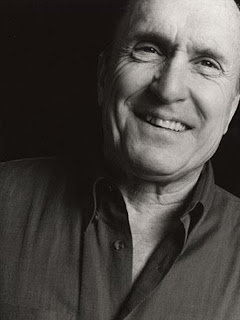 Last month, I began a painstaking process of trying to archive my old college newspaper articles. My original introduction (and much-needed caveat) can be found on my first archival piece, an interview with author Chuck Palahniuk. Earlier today, I was going through my physical copies of the old Chicago Flame pieces, and decided to reprint my interview with actor/director Robert Duvall. This interview was conducted as part of a Chicago junket for Duvall's Assassination Tango, a 2003 film that seems to have fallen into relative obscurity. Like The Apostle, Duvall wrote, directed, and starred in this feature. This wasn't my most in-depth interview, but at the time, he was very personable and genuinely interested in interacting with a group of college newspaper reporters. The interview also featured his then-girlfriend and co-star, Luciana Pedraza.

Not a movie goes by where a filmmaker does not address a current film assignment as a "life" or "dream" project. Take Martin Scorsese, for example. It seems as if every film he's directed, from 1980's Raging Bull to last year's Gangs Of New York, has been influenced by his life or his ideas. Not to take away from Mr. Scorsese's talents, but Robert Duvall's latest effort, Assassination Tango, redefines the phrase "a labor of love." The film combines virtually every important aspect of Mr. Duvall's life. In addition to writing, directing, producing, and starring in the movie, he shapes it to reflect his personal life and immense attraction to the seductive, fantasy-like world of Argentinean tango.

"It's an extension of myself," Duvall tells The Inferno (note: this is the entertainment supplement to the aforementioned Chicago Flame) about Assassination Tango. "Whatever works, works, from ink to behavior." His reasons to make the film are simple. "I like to tango. My curiosity made me do it."

Duvall is no novice filmmaker, having succeeded with past directorial works such as 1996's The Apostle. Along with financial support from friend and The Godfather director Francis Ford Coppola, Duvall had little trouble getting the film off the ground. Assassination Tango tells the story of John J. (Duvall), a man leading a classic case of a double life. In addition to owning a string of beauty salons, he moonlights as a hit man. He's able to keep his dark side a secret from his girlfriend (Kathy Baker) and her young daughter, but a problem arises with his latest duty. John is hired to wipe out an Argentine political leader. However, plans backfire, and he is forced to stay in Buenos Aires longer than anticipated. To elude boredom, in a foreign land, he spends his nights at a local tango club, only to become quickly infatuated by the beauty and dance skills of Manuela (Luciana Pedraza). The two have an instant attraction to each other. Interestingly enough, the attraction does not come in the form of blatant romance or lust. The world of tango brings them together, both as a physical dance as well as a mental euphoria. 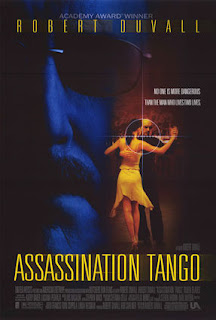 Behind the camera, the casting choice of Luciana Pedraza was a worthwhile risk. She is not a professional actress, but is Mr. Duvall's real-life girlfriend. The two met during one of his many trips to Argentina, and he introduced her to tangoing. Assassination Tango is Pedraza's film debut, and she learned a lot from Duvall, and very rapidly at that. One of her many lessons was that of small nuances that go into making a feature film.

"Films are a learning process for everyone [involved]," says Pedraza. "I learned a lot from Bobby [Duvall], he's a professional. You listen to Bobby and learn. It was his project. If I needed help, he'd give it to me. Most directors don't." For an acting newcomer, Pedraza knows that acting is no small feat. It involves intense work, seriousness, and above all, patience. "It took me a year [to prepare]," she says. "You work with hair, clothes, and makeup. You need to put up with your moods. There's a lot of working out, about five hours a day. I lost 10 pounds!"

Duvall and Pedraza were able to maintain a proper distinction between their personal and professional lives. "Good directors let the actors bring it," says Duvall. About Luciana, he comments "she never let me forget her performance [in the film]." It's obvious that their experiences while making Assassination Tango have added to their understanding of true acting. "What we do in front of the camera is what we do here," says Pedraza. Upon seeing the film, one realizes how true this sentiment can be. The acting does have a natural flow, without the slightest sense of strain or rehearsal.

"It's like life," adds Pedraza. "I wanted to be truthful. [You have to] remember everyday life and add a sense of reality."

The film is based on Duvall's keen interest in the tango lifestyle, especially in Argentina. If the film's acting was supposed to be natural, then the beautiful dance scenes seem to be instinctual. Duvall and Pedraza epitomize the moves and mannerisms of world-class dancers. According to Duvall's observations, Argentinean tango is an activity that encompasses many layers. "Dance is a continuous thing, a hobby," he says. "You need a physical hobby. [I was] a little shy dancing in public." Despite dozens of trips to the country for the sole purpose of honing his dance skills, Duvall makes a curious comment: "Many Argentineans can't do it." So what makes tango in Argentina so appealing? "The people [European tango dancers] are so skilled and so arrogant," says Duvall. "[In Argentina] it's a social dance, like with the old men at weddings. It's sweet and calm in the clubs. It's more for export, for flash and show in Europe."

Overall, Assassination Tango is yet another solid outing for Duvall the auteur. The plot is simple and relies mainly on thematic dancing and everyday dialogue. Duvall's screenplay lacks some action that would have provided an interesting contrast with the wonderful dance sequences. However, that does not detract from a visually appealing and intoxicating portrait of a well known yet little understood dance.
at July 20, 2011