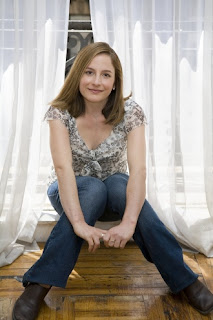 "I feel like I'm always missing the mark in one of two directions: writing 'serious' lines, disgustingly lyrical sentences about the weather or whatever, like imitation Virginia Woolf, or I want to make a joke about boners. I want to write terrible, juvenile humor. Or have a shark fall out of a trapdoor, something nutty. So I'm constantly listing in one direction or the other; literal-lyrical or goofy-surreal. It's like: There we go, another four paragraphs about the violet cloud--the giant purple boner cloud in the sky...(Karen Russell, Tin House #46)"

When I use the word "discoveries," I need to clarify that I'm not claiming that I'm the first person to be introduced to new writers or publications. The true meaning is that I'm discussing personal discoveries. For my final post of 2010, I went through a long mental list of possible topics, seeing that, thanks to the holidays, my personal projects and readings have been temporarily sidetracked. I was tempted to spend a day doing a marathon reading of my New Yorker and New York Review Of Books back issues, and then write about a collection of themes and ideas that I had missed in the last year. I also toyed with the idea of simply doing a list of what I thought were my best posts of the year, but that was too self-serving for my tastes. So I decided to highlight two of the more exciting literary gems that came to my attention in 2010. While I've read and discussed a decent number of the writers who were featured in The New Yorker's "20 Under 40" list, the emergence of Karen Russell is proving to be too exciting to overlook. Also, I simply do not have the financial means or time available to devote to all of the terrific literary magazines and journals that are highlighting unknown voices and talents, even in the midst of a recession when such periodicals can be viewed as an unnecessary luxury. Some of these fine publications are struggling, yet surviving. And in 2010, I was fortunate enough to familiarize myself with the excellent stories and interviews of Tin House magazine, and in a wonderful coincidence, their final issue of 2010 features an excellent interview with Mrs. Russell, conducted by Elissa Schappell.

Russell's sentiment of combining the odd with the literary is evident in the few pieces I've read by her, but even going by such a scarce bibliography, her worthiness of being considered among the best young writers is never in doubt. In The New Yorker's July 26th issue, she published a stunning story entitled "The Dredgeman's Revelation," a tale involving a lonely Depression-era boat worker in the Florida swamps (Florida being Russell's native state). The man, named Louis Thanksgiving, escapes from his abusive adoptive father and ends up traveling through the Everglades, keeping a positive spin on the drudgery of his situation, attempting to define the notion of "friendship" among his fellow workers, and finally experiencing the surreal, horrifying fate of a man named Gideon. Without any real change in voice or narrative, Russell writes scenes of stunning imagery and metaphor:

"The doctor lit a Turkish cigarette and let out a little cry, a sadness that registered in decibels somewhere between a gambler's sigh and the poor woman's grief-mad wailing at the end of her labor--and then another cry joined the doctor's. The stillborn's blue face opened like a flower and he cried even harder, unequivocally alive now, unabashedly breathing, making good progress toward becoming Louis. The baby's face was reddening by the second, and the doctor plucked the cigarette from his lips like a tar carnation. He would have liked to keep on smoking, and drinking, too, but babies--you couldn't just stand there and toast their voyage back to nothingness (Russell 63)!"

And scenes of perverse oddity:

"In a scene that seemed as plausible and as horrifying as Louis's worst dreams, the birds descended on Gideon and hooked the prongs of their talons into his skin; perhaps a dozen of them lifted him into the sky. Gid's body shrank into the cloudless expanse. The sky that day was a bright sapphire, better weather than they'd had in weeks; for a long time, the men could see the shrinking pinpoint of Gid's black head, lolling below his shoulders, as if he were trying to work out a bad crick in his neck (Russell 69)." 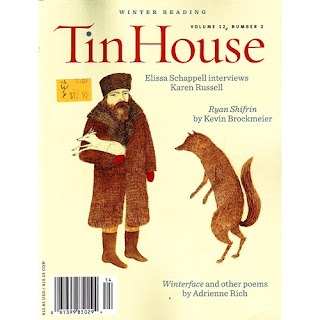 In addition to excellent reviews, stories, and poems, the editors and writers of Tin House have a penchant for wonderful author interviews, and Schappell's discussion with Russell is no exception. Their conversation is witty and thought-provoking, and reminded me of the first issue of Tin House (#40) that I picked up, and the unabashed joy of literary discussion that was evident in that issue's interview with Colson Whitehead. Russell is modest about her success and talent, and a noticeable theme in the Tin House interviews is that the featured writers aren't being long-winded or outlandish in their breakdowns of the creative process.

"I've just stared to try to write longhand. The Internet is just this evil temptation. The hardest thing for me, as you can tell from this conversation, is ADD--just staying in my seat overcoming whatever distractions...The only process that works for me is what worked in grad school: trying to meet a terrifying deadline. I don't know how to do it, how to finish anything, without death swinging its fiery sword over my head. I don't know how to finish a draft without a lot of donkey kicks from anxiety and terror and self-loathing (Russell 109)."

It's also enjoyable to note the enthusiasm displayed by the interviewer. Elissa Schappell writes:

"Because critics, like scientists, relish classifications, the discovery of such a unique young talent has set off a flurry of attempts to label her particular genius. Her inventiveness and embrace of the absurd suggest George Saunders. Her macabre humor and Southern-gothic--or, in her case, swamp-gothic--sensibility make her kin to Flannery O'Connor. Ben Marcus simply defines her as 'a literary mystic (Schappell 104).'"

Swamplandia!, Russell's debut novel, will be published in February, all but assuring that 2011 will be off to an excellent start, literature-wise. I'm beyond excited to follow her upcoming publications, and I get the strong feeling that her writing, while stylistically different, will follow along the same path of Jonathan Lethem: works that are strange and sometimes genre-based, but grounded in serious talent and beneficial to the literary world as a whole. In the same fashion, while I want to open up my readings to other literary magazines, some that deserve more attention, I'm also looking forward to discovering new voices in Tin House. I devoted a decent segment of this site to essays and discussions of established, well-known writers, but the up and coming artists will continue to make their way to mainstream consciousness. While I'm not in a position to highlight these people or publications before anybody else, the joy of personal discovery can be just as, if not more, important.

A final note: I've said this before, but I cannot thank you enough if you're a regular reader of Chicago Ex-Patriate. As of now, I'll be following the same format in 2011, and while I probably have a very small audience, I find this outlet to be immensely satisfying, and I look forward to keeping up with everyone's websites and blogs. I've discovered a lot of new creators and mediums that way, and I hope that I'm helping you do the same. Happy New Year!