Notes From a Fellini Novice 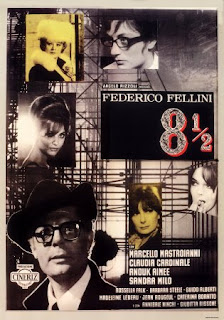 It's been awhile since my last film essay, so in some way, it feels appropriate to go all out on this newest piece. Imagine having a friend who's a major book reader, with shelves full of old and new classics, as well as some underrated and hard-to-find gems. Now, picture a friend who's a music buff, someone with an overloaded iTunes account and an impressive collection of rare vinyls. We all know people who fit these categories, but imagine if the reader admitted to having never read a play by William Shakespeare, and the audiophile slipping off some headphones and saying "Well, I've never heard a Beatles song."

Perhaps I'm exaggerating a bit too much, but then again, perhaps not. As a film critic in college, I wrote dozens of reviews and essays, interviewed quite a few actors, writers, and directors, and had an article total that measured over one hundred. As I've hinted at here, I still consider myself a film lover and student, but until this weekend, I had never seen a film by Federico Fellini. This was by no means an intentional oversight; his works simply got lost in the shuffle. When browsing at a video store or scrolling through the Netflix website, I'm usually more likely to select a film by a director I admire (hello, Kurosawa) instead of doing the more responsible action of researching films and directors I need to know. It was almost by surprise when 8 1/2 was delivered last week, and I'm glad it's the first Fellini film I've seen. He has a serious, devoted fan and scholar base, and I would venture to guess that some people might place his other works above this assumed masterpiece. I might as well start at the top and work my way down the list.

I love reading film essays, but the more I tried to remember, I realized that I knew nothing about 8 1/2 going in, save for one or two screencaps in my high school cinema textbook. Last night, I even went to Roger Ebert's "Great Movies" database, but the link to the film wouldn't work. However, I viewed this as a plus; it's very rare to go into such a highly regarded and influential work with such a clean slate and absolutely no notions or subconscious assumptions. Despite not knowing anything, there is only one potential problem--every "discovery" I made in my screening has been "discovered" literally thousands of times, and undoubtedly analyzed and documented in staggering numbers.

What struck me the most about the film was the plot, which also serves as the best way to introduce any analysis to this work. Guido's (Marcelle Mastroianni) film, and by extension 8 1/2 as whole, is literally about everything and nothing--his newest, most anticipated film is talk about with great detail, and imagined in vivid dream interpretations. If it were actually made, it would be a long epic about family, Italian society (filtered through personal relationships and a heavy dose of Catholicism), and the intangible qualities and limitations of creativity. The basis is film (in Terry Gilliam's' DVD introduction, he puts it accurately and succinctly: Fellini was making a movie about making a movie), yet one can easily substitute any means of expression, be it writing or painting, and still get a general understanding of how at times, as seems to be the case with Guido, having too many ideas and options can be just as fatal to the creative process as having none at all.

Given the dizzying sequences, the wealth of people in his life, and the pressure that he's under, it's almost shocking how casually Mastroianni portrays Guido. He snaps at people once in awhile, but for the most part, he spends a lot of screen time with an intense, but thoughtful expression, as if he's studying everyone and everything around him, or merely being an innocent bystander to his own life and looming film. At times, he almost seems bemused. This is oddly appropriate--everything is happening around him so fast that there's almost no choice but to take an emotional step back.

Fellini's portrayal of women is undoubtedly a major subject in the film world, especially for anyone studying film today, with female directors and writers finally gaining much more clout and freedom in Hollywood. For anyone familiar with 8 1/2, the whipping sequence is probably the one most cited in regard to Fellini's look at women. Again, Terry Gilliam's thoughts are essential. He states that Fellini felt every conceivable emotion towards the opposite sex---love, hate, lust, confusion, respect, and objectivity. This is one of those rare, rare instances in which such a defense is both plausible and acceptable. Fellini puts his feelings on the screen with nothing hidden. If one wants to criticize the way the women are viewed, especially in that scene, it's out in the open. There's no way around it, and if it's any twisted consolation, despite their mistreatment, the women clearly gain control. The scene ends with a moving metaphorical image in which Luisa (Anouk Aimée), Guido's wife, cleans and laments the chores that need to be done. Just like in the real life actions of the film, she carries the burden of supporting Guido despite his infidelities and selfishness, but she also seems him with brutal honesty, without any shred of awe like his mistress.

This also marks the second film I've screened this month featuring a score by Nino Rota (the other being Rocco and His Brothers). The music never dominates, but serves as the perfect emotional accompaniment to the actions. Rota is still highly regarded, but while watching 8 1/2, I couldn't help but wonder if his score to The Godfather has taken away from his complete body of work. "The Godfather Waltz" and its multiple variations are stunning, yet blunt in the course of the trilogy. I feel that Rota's other scores, as evidenced in his work from the 1960s, are much more powerful on a subliminal level, blending with the scenes like the actors instead of being an obvious highlight.

Fellini does a beautiful job behind the camera, especially with close-up shots. The opening sequence is a striking example. He didn't create or revolutionize the art of the film close-up (my vote is for Sergei Eisenstein's The Battleship Potemkin), but uses it for the absolute effects. The camera lingers just a second longer than anticipated, thereby creating subliminal emotions, making the viewer think about a character whilst keeping up with the continually moving storyline. With such a famous film, part of the fun is picking up on some of the influences evident in films that came after. In a previous post, I commented on the dance sequence in Band Of Outsiders influencing the dance scene in Quentin Tarantino's Pulp Fiction. However, the very brief character dances in 8 1/2 are much more similar to the footwork displayed by John Travolta and Uma Thurman. On a purely hypothetical note, the character La Saraghina (Eddra Gale) would be right at home in a Pedro Almodovar film (yet another filmmaker famous for depictions of women, albeit for vastly different reasons).

I look forward to viewing more of Fellini's filmography, and it's liberating to admit that I'm new to such a famous name in film (I do have a few others that I haven't seen, but they would be much too embarrassing to admit). 8 1/2 isn't my favorite foreign film, but I found it incredibly well made and evocative. For a film that's been lauded for so long, it's satisfying to discover it without any outside influences, and to therefore draw my own conclusions. With everything artistic documented so heavily, especially with the power of the Internet, moments like these are much too fleeting.
at September 27, 2009