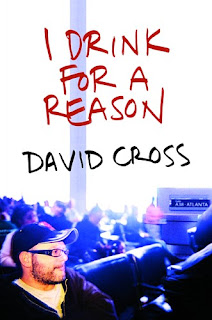 As a few of you may know, I've long been a major fan of stand-up comedy. Whether this involves some established veterans or some newcomers who only garner a few laughs on a late-night special, I'm always glad to devote at least twenty minutes of attention. The art form has exploded and developed quite a bit in the past fifteen years or so, with the best (yes, opinions will vary on these signifiers) having the chance to become A-list millionaires (see Jerry Seinfeld) and the worst sometimes being so persistent that they are at least able to maintain some exposure (see Carlos Mencia). No matter what, it seems inevitable that most comedians eventually find their way to publishing books.

It's on these pages in which even the best seem to falter more often than not. Even George Carlin's three books decreased in quality, from the excellent Brain Droppings to When Will Jesus Bring the Pork Chops?, which was a combination of tired rantings and blatantly recopied pieces of his older works. Lewis Black's style works very well in book form, and while I haven't read his works (I've only watched clips online), a close friend of mine swears by the writings of Bill Hicks. With this range of possibility in mind, I was excited when I learned that David Cross, one of my favorite comics, was publishing his own book. His stand-up can almost feel like storytelling in the best way, and given his history of essay and television writings, I had very high hopes going into I Drink For a Reason. Now that I've finished it, I'm a little varied in my initial thoughts. His best chapters are both thought-provoking and hilarious, but he also hits the occasional stumble.

What's refreshing is that David Cross can take (intelligent) criticisms without flying off the handle, but is unafraid to respond to misinformed critics with solid defenses of his material and opinions. In an era when any comic who speaks in more than a compound sentence is referred to as a "thinking person's comic," Cross is an actual embodiment of this description. For example, he shares his response to a blogger who referred to one of his sets as "bigoted."

"And Emily, if that was 'the most blatant display of bigotry [you've] ever witnessed in person,' then you have lived a charmed life, for sure. I think that you are being hyperbolic and overdramatic, to say the least. While it's true that I made fun of Mormons and their beliefs, you completely ignored the context in which I did it. The ENTIRE premise of the piece was first prefaced (and this lasted over a minute) by saying that, should I ever choose to run for any kind of office, that, no matter how many good ideas I might have to improve the quality of everyone's life or implement a universal health care plan etc., that I could never get elected because I am an atheist (Cross 60)."

He's not only defending himself, but he's doing so in an honest, well-written manner, backed up with facts and actual responses instead of bile-spewing indignation. Elsewhere in the book, he does emit some intense backlash, but this is reserved for people like Bill O'Reilly, as displayed in a hilarious and shocking re-imagining of his appearance on The O'Reilly Factor. In addition, I was excited that the book included his open letter to Daniel Whitney, aka Larry the Cable Guy, written after Cross was called out for criticizing the comedian and his fan base. Again, his rebuttal is intelligent and honest.

"What does it mean to 'Larry' something up? Take a wild guess. The reason you feel the need to 'Larry' something up? Because you are not that dumb. I mean you, Dan Whitney, the guy whose name the bank account is under. You were born and raised in Nebraska (hardly the South), went to private school, and moved to Florida when you were 16. This is when you developed your accent?! Not exactly the developmental years, are they? At age 16 that's the kind of thing you have to make a concerted effort to adopt. Did you hire a voice coach? Or were you like one of those people who go to England for a week and come back sounding like an extra from Lock, Stock, and Two Smoking Barrels (208)?"

He's also not shy about calling out other celebrities, namely Whoopi Goldberg and Jim Belushi. What elevates his critiques is that he's not doing so in some gossipy, Kathy Griffin-esque manner. He has his reasons and opinions, and they work in the context of the chapters, and not just random insults.

So far, I've offered a pretty strong recommendation of I Drink For a Reason, but as I mentioned earlier, the book does have its limitations and rough patches. He offers some fictionalized looks at his future involvement with the East Coast literary scene in anticipation of being a published author. There are also a few lists reminiscent of Mr. Carlin, including "A Free List Of Quirks For Aspiring Independent Filmmakers" and "Didja Know?," a collection of random facts. These have the occasional flash of genius, but overall, Cross's writings work much better as serious personal anecdotes and riffs on religion and American culture. However, his best fictionalized piece is his parody of Pitchforkmedia.com, which literally made me laugh out loud.

"Why not listen to Pillow Logic's new disc, Treason to Live, a wiry concept album that gives new meaning to the phrase, "Now, I've seen everything!" Ostensibly about a young girl who loses her shoes in a cockfight she mistakenly attends during Thanksgiving of '59, it's really about the universal themes of loss, angst, candy, and damp clothing (198)."

What's most unnerving is that even the best essays in this book are either much too short or seem to end in the middle of a thought. It's hard to tell if this was intentional on Cross's part, since, for the most part, there's excellent transition elsewhere. To put a brighter spin on this, it leaves the reader wanting more, especially if a piece ends just as he's hitting a groove in a given argument. Overall, Cross displays some excellent writing, despite these snags. Personally, I hope that his next book will be more essay-based, as that is definitely his strongest written medium. Thankfully, I Drink For a Reason isn't a retread of his stand-up material, but a showcase for talent that he displays on various media--on stage, on screen, and now in print.