I've spent bits and pieces of the past three days or so working on, editing, and re-writing this post, which to begin with was nothing more than a light preview of the upcoming NBA season. As much as I love the NBA, I've never really found myself thinking about an approaching season, at least not as much as I've been doing in the past month. Even though Seattle no longer has a team (which means limited TV broadcasts for me, unless Comcast miraculously decides to air Portland Trailblazers games), and the Chicago Bulls are probably not going to accomplish more than a first-round playoff loss, I've found myself wondering about teams that I normally wouldn't think twice about. This is very good, since I've expressed earlier excitement about the NBA returning to relevance, and I feel that after last year's playoffs, and all the coverage of the preseason, the relevance is genuine.

Also, the fact that writing a simple, breezy preview was so difficult is very good, since I found myself trying to "out-hustle" (yes, please forgive the obligatory basketball cliche) each previous draft. On a humorous note, the sport of basketball also contributed to delays in the writing. I live next to a church parking lot that has a basketball hoop, and I tend to try and alleviate bouts of lackluster readings and writings by going out to shoot baskets. It didn't help too much in this case, but at least I got a taste of irony by actively engaging in the very sport that I was having trouble writing about. All of this buildup might be too much. Instead of a strict essay, I'm going to try and answer my own questions about the 2008-2009 NBA season, which begins on Tuesday.

1.) Is Greg Oden going to be under too much pressure? Oden was the first overall pick in the 2007 draft, but missed the entire season due to knee surgery. Now that he's healthy, he's generating even more excitement than he did before last season, even to the point of overshadowing this year's rookies. His team, the Portland Trailblazers, had an excellent season without him, even though they missed the playoffs. I don't think he'll be under pressure, but everyone in Portland (and the NBA) will be holding their breath for at least two weeks to make sure his knee really is healed. The Trailblazers will definitely win 5-6 more games than last season, and a final stat line of ten points per game, fifteen rebounds per game, and two blocks per game would be an excellent first season for him.

2.) After this season, will Chris Paul of the New Orleans Hornets be considered the best point guard in the league? Yes.

3.) Will Larry Brown make a difference as the head coach of the Charlotte Bobcats? This is a tough question. They're a young, unproven team with a few good individual players (Gerald Wallace, Emeka Okafor, and potentially Sean May), but nobody can really expect them to make a playoff run. Brown has historically coached teams to better performances, but his tendency to jump from team to team wears thin after awhile. However, as comically inept as Michael Jordan has been as a basketball executive (he's the Manager of Basketball Operations for the Bobcats), he at least brought in a great coach and will hopefully leave Brown alone to call the shots. The quality of leadership too often gets misconstrued, especially in the sports world, but Larry Brown will at least bring stability to the franchise.

4.) After years of clearly being the lesser conference in the NBA, has the Eastern Conference caught up? Yes, finally, although the top to bottom talent still isn't as great as the Western Conference. As odd as this may seem, I think it's due to a single player not named LeBron James. Elton Brand's signing with the Philadelphia 76ers has made a decent team potentially one of the best in the conference. To me, that shows how close the East is to being equal to the West. All it took was a single player to elevate a team, and I feel that a few of the Eastern Conference teams are one or two star players away from being consistent playoff threats. Want another example? If Kobe Bryant had gotten his early wish last year and had been traded to the Chicago Bulls, he would have taken the team deep into the playoffs. Since the Western Conference rosters are quite deep, it's easy for a single trade or signing to help shift the balance. I envision more trades in the coming months leading into the new year, trades that will help teams get better.

5.) Which Western Conference disappointment has the "best" chance of losing in the first round again? I have to go with the Phoenix Suns, and it has nothing to do with the team getting older. I just simply cannot see Steve Nash, Amare Stoudamire, and Shaquille O'Neal getting deep into the Western Conference playoffs. The other disappointments have made improvements. The Dallas Mavericks have a new coach and an overall sense of urgency to shape up and stop getting kicked around. The addition of Ron Artest to the Houston Rockets, along with a healthy Yao Ming, should at least get them to the second round of the playoffs. The Suns? It should be another season of 50-55 wins and another playoff disappointment. Most of the articles I've read hint that the team will probably be dismantled if they fall short, but no matter what, they cannot lost Amare Stoudamire. Rebuilding is fine, but it would be fantastically stupid to let go of one of the best young players in the league.

6.) In regards to the new Oklahoma City Thunder logo: are you kidding? 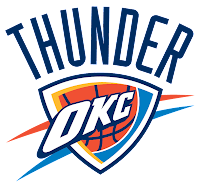