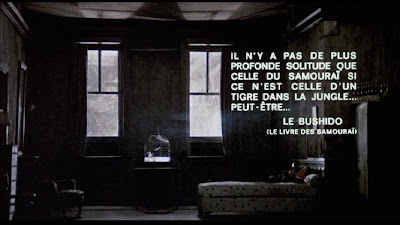 Translation: "There is no greater solitude than that of the samurai, unless it is that of the tiger in the jungle...perhaps..." (Le Bushido, The Book of the Samurai)

My first viewing of Le Samourai was two years ago, and I picked it for this project because I remember looking back on it in terms of the overall look and "feel" of the production design. Having watched it again, I'm amazed at just how much the design works on both a literal level and an intangible level. It is credited to Francois De Lamothe, but one has to wonder how much of it was actually done by him, and how much was done by Melville, who always maintained extensive creative control over his films, going beyond writing and directing.

The opening shot above establishes Jef Costello's (the samurai) apartment, a bare, dark studio with very few objects. He is a man who lives by personal principles and an undefined (yet obvious) code of honor, so it's natural that his living space is just for that purpose: living. Scenes throughout the film show what he owns as far as basic necessities: 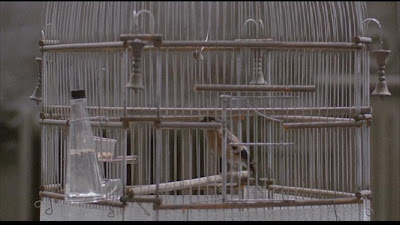 A bird for companionship (which also plays a crucial part in the plot); 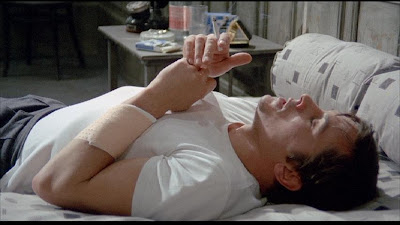 Cigarettes, water, an alarm clock, and a telephone; 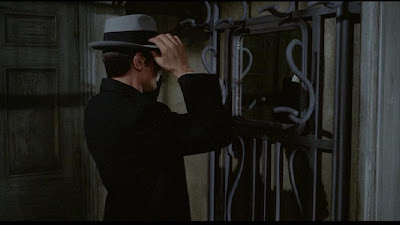 And the object he uses the most, his mirror. Everytime he leaves his apartment, he carefully makes sure he looks presentable, playing into his personal principles. 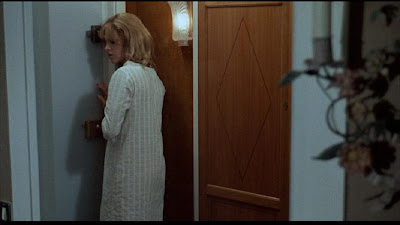 Early in the film, we see his girlfriend's apartment, and it's striking how clean and modern it is compared to his place. Virtually every other scene shows that he lives in a modern world, yet maintains an old-fashioned simplicity in his own world. 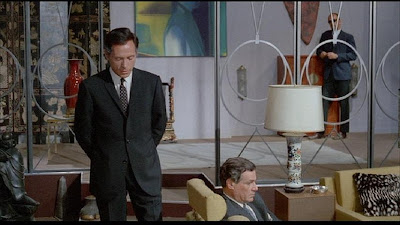 This apartment above (where his bosses meet and confer) is extremely gaudy and doesn't seem to match what a gangster's residence would look like on film. However, it's an excellent representation of excess. Some of the houses in Martin Scorsese's Goodfellas follow the same decor. 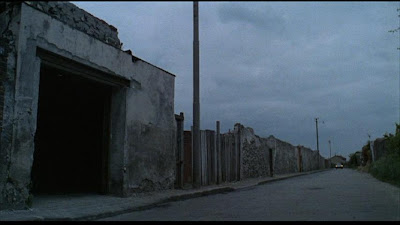 This is the garage where Jef takes stolen cars to have the license plates replaced. Other than his apartment, it's the only place in the film that seems run-down and shabby. His work as a contract killer takes him to lavish apartments and lounges, yet the places he consistently has to visit reflect the underworld of crime.

Lamps and lights are a constant in the film. As a killer, Jef relies on being hidden and in the background, yet is unafraid to have a spotlight. When he is under scrutiny or being questioned, he maintains a strong alibi, and the lights show that he appears to have nothing to hide. The single lights also remind me of interrogation scenes in countless police/crime movies and television shows. 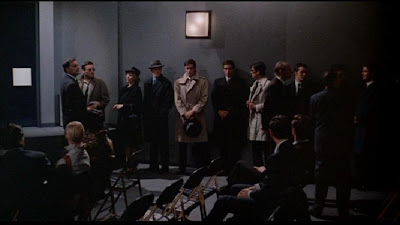 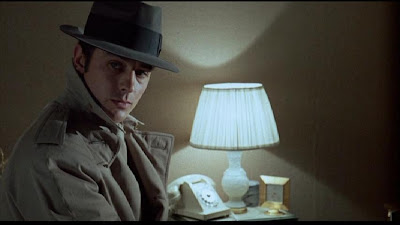 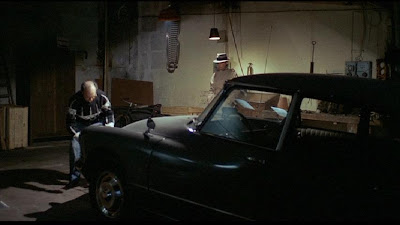 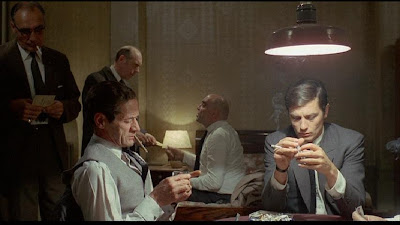 The police lineup shot below is one of my favorites. In addition to keeping with the theme of spotlights, it introduces another recurring motif: lines. Whether vertical or horizontal, many of the scenes contain straight lines. I initially thought of a scene in Double Indemnity, where as a representation of guilt, Fred MacMurray is covered in the shadows of Venetian blinds, giving the impression of a jail cell. I'm not sure if that idea works for Jef, because he never feels guilt. 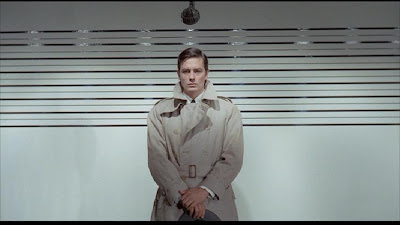 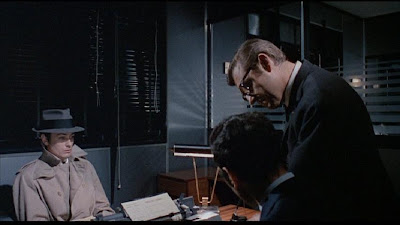 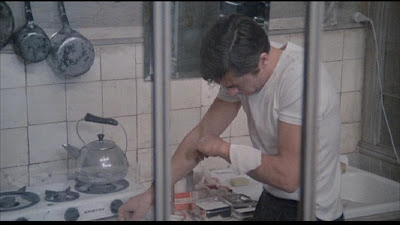 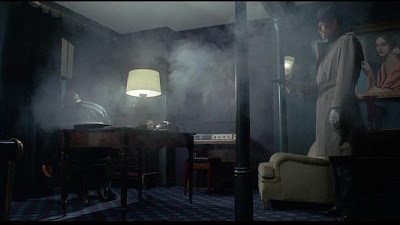 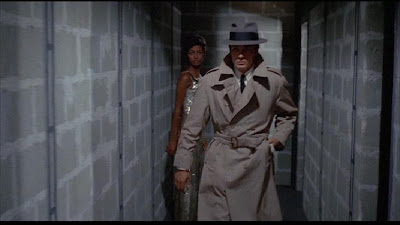 If we are indeed meant to think of jail cells in relation to lines, the above scene is the best representation of that. 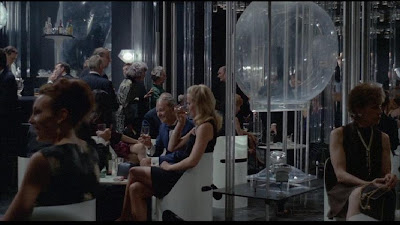 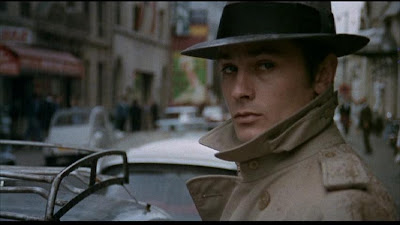 The above shot shows Jef leaving his apartment for the first time. It might be hard to see in this image, but there is an excellent contrast. His hat and trenchcoat blend in to some of the buildings, but as he keeps walking, there are bright colors in the background. He's hidden and in plain sight at the same time. 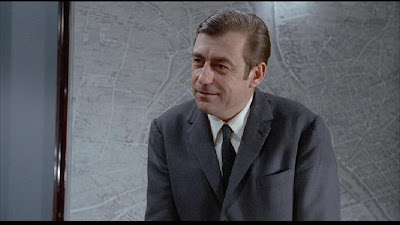 The police Superintendent is often juxtaposed with maps of Paris (in another scene, he tracks Jef through the Parisian metro via spies and electronics, all while watching it on a large, illuminated map). As he investigates the nightclub owner's murder, he alternates between being very charismatic and very blunt. In his mind, he owns the city, and he doesn't believe that anybody can hide. 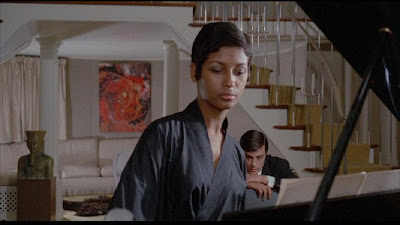 In the above scene, Jef visits the lounge's pianist. Aside from his behavior and the title of the film, these are the only other references to Japanese culture. The pianist wears a Japanese robe, and to her left appears to be a bust of a warrior. To me, this is smart filmmaking....if these were to appear in Jef's apartment, they would draw too much attention and clash with the minimalism of the apartment as well as his samurai code being reflected strictly through his actions. 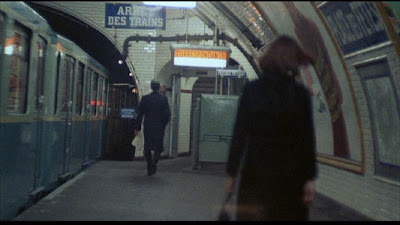 The metro scenes also provide contrast, being extremely well-lit and lined with colorful advertisements. Jef does his best to lose the spies following him, despite being cornered and unable to hide in the open, vibrant spaces.

The only other film by Melville that I've seen is Bob le Flambeur, and while I plan on watching that one again as well, I don't remember being consciously aware of the production design. The beauty of Le Samourai is that the viewer has little things to process in addition to following the plot and dialogue. It's not a complicated film, but the attention to detail is remarkable.

As far as the costume design goes, it's important to note that most biographies of Jean-Pierre Melville mention his love of all things American. Jef is clearly modeled on American film noir, and he would easily fit into a movie like Out Of the Past or Public Enemy. However, his personality is strictly samurai. He's not loud or abrasive, but succinct and to the point.

The film also maintains a very modern look, and even today, does not appear terribly dated (with the exception of the police equipment). While there's no doubt that it's set in Paris in the 1960s, some films from that era are painfully obvious, whether it be the clothing or the objects in various stores and houses.

This trailer for the film shows how it looked during its initial release, thus showing how important digital restoration can be in relation to production design. While the notes and analysis that I've written here are still apparent, the scenes and cinematography seem less vibrant than they do on the DVD release. It also makes the film look extremely dated, contradicting my ideas in the above paragraph. The small details and backgrounds seem dulled. On DVD, we're seeing the film as it's meant to be seen.

(Note: Forgive the vast amount of blank space at the bottom of this posting. I was having a lot of formatting issues.)

Nice post, Jaime, and a lovely set of screencaps from a great-looking film. Really appreciate your attention to the details of his apartment, and the tensions between that space and the other spaces of the film.

nice! I want to see this film now even more badly than before

Thank you, Jana. Like I mentioned in my post, there was something about the film... I remember enjoying it the first time, but going back to it really opened my eyes to a lot of things that I missed, and wonderful scenes that I forgot. I guess that's what the Production Design Blog-a-Thon is all about, at least in part. -Jamie

Great post...My favourite part of the film is when the inspector is flipping between all the different rooms within the police station as he's keeping the different people he's interviewing separate from each other.

I'd taken a bunch of screen shots of other films for a second contribution to the blog-a-thon and "Le Samourai" was one of them. We took almost the exact same shots on 3 or 4 different occasions (the gangsters' gaudy apartment for one). You did a far better job covering this than I could've...

Good analysis of the strong use of lines. The bust in the background is an Egyptian Pharaoh.

Perhaps I'll get my Netflix again when I get back to the US...although Blockbuster is better on some things...

I'll be darned...you're right, that is a bust of a pharaoh. Oh well, at least that was the only mistake I made in my analysis...I hope.