In the past, when I updated this blog regularly, I often did two things consistently: 1.) I'd have a great idea, say something along the lines of "I'll write about this soon!", and then never get back to it. 2.) I'd recognize this failure, claim to not make plans in writing, and then the cycle would repeat again.

But in this case, I'm taking on a smaller scale project for 2017, and I think the benefits I'll outline here have merit.

The accompanying photo shows two shelves of back issue literary magazines and journals. While I'm sure others have much more impressive collections, I have to admit that I haven't finished a lot of these. There are a handful that I've read front to back, some issues I've read selections out of, and some that I haven't touched. People love to talk about collecting books, and this word has spawned endless memes and book posts. But what about literary magazines? Are they counted as books, especially when piled up? Or should they be considered their own class?

This also came about because there are many books I want to reread this year, and I realized that nobody talks about rereading literary magazines. I'm not under the assumption that I'm doing anything unique or radical. This is my own project, to help myself as I put more emphasis on supporting the literary community that has supported me. 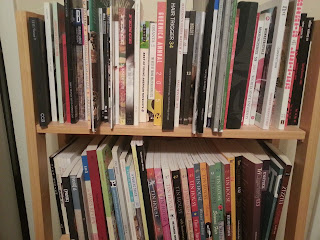 I'm not concerned with definitions; what I am concerned with is dusting off some older archives, and giving new attention to pieces that might not have been widely read in the last couple years. When literary magazines are published, they receive attention, hopefully some sales, but this often isn't sustained. The bump in sales and clicks is probably at its strongest when the issue debuts. What I'm hoping for is a renewal of this energy.

So for the rest of 2017, I'm going to read these all from beginning to end, and I'll document hidden gems, early pieces from now well-known writers, and give older literature a bump.

I'll also add to my collection as the year goes on, through single issues that I find and through subscriptions that I'll be taking out in due time. As for online literary journals, I'll work those in, but I'm not sure how. For now, the focus is on the printed, physical ones, especially in this age when not many journals still produce actual magazines.

I started this last night, and I already made a pleasant discovery: I'm reading a 2010 issue of Eleven Eleven Journal, and I read an early piece by Alissa Nutting, one of my favorite fiction writers. I'll include more analysis when I report back on the issue, but this is what I want: to see the early development of writers, and to discover names that have slipped under my radar. Maybe these are writers who are still widely published; maybe I'll fall in love with a story by someone who published one piece of fiction in 2012 and never published again.

I'll either do single issue recaps, multiple issue analysis, or a combination of the two. I might incorporate online magazines as well, but this will mostly be devoted to the physical copies, old and new.

If anything else comes to mind, I'll update this post accordingly. For now, I like this foundation, and I'm eager to really get it moving.