Inheriting the Fire:"May We Shed These Human Bodies" by Amber Sparks 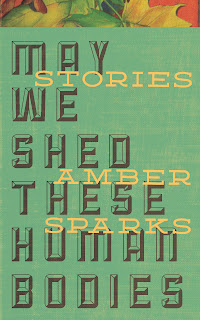 In my usual readings and literary magazine research, I first noticed the name Amber Sparks a few months ago, but it wasn't until even later that I finally read a full excerpt of her fiction. In October, I was awed by "Birds With Teeth," a fantastical work of historical and scientific fiction published in The Collagist. Based on this story alone, I made a mental note to check out May We Shed These Human Bodies, her recently published story collection. Having finally read it, I'm still analyzing the various ebbs and flows of her creativity. I've read many a short story collection and have enjoyed the majority of them. But there are very few that have affected me like this one. For such a slender volume, Sparks has managed to incorporate every conceivable emotion and almost every conceivable genre. I'm not one to dole out breathless praise with no context, but in the week or so since I finished reading the collection, I find myself thinking about the stories constantly. To put my emotional reaction into that much-needed context, I was engaged by her fiction much like I was with the works of Matt Bell. The strength of a single story (in Bell's case, this was "His Last Great Gift") has led me to make sure I don't miss any future works by the writer. May We Shed These Human Bodies contains a similar variety to Bell's 2010 book How They Were Found. And in both cases, the originality and depths are astounding.

The stories in May We Shed These Human Bodies have been previously published in a variety of journals. It opens with a piece titled "Death and the People," and this serves as an excellent opening, since it combines great examples of what Sparks will show in the following pieces. It's funny, sometimes goofy, yet philosophical and grounded in thought-provoking ideas. Death, a suave, well-dressed, handsome entity, brings the entire human population to the afterlife, and has to listen to their endless complaints. In the midst of this humor comes some touching, beautifully detailed sketches:

"Death was starting to understand why he felt sympathy for the people, why he was even beginning to grow fond of them. They were so brave and stubborn in the face of things that couldn't be changed. Even dead, they clung to their sense of what it meant to be living, and they seemed utterly unable to give up. Over the eons, Death had watched countless beings shed life like a skin, wriggling free and wrapping themselves in the elemental instead. Most beings seemed to delight in losing the weight of the world. But the people held hard to weight, to the heaviest things like furniture and loss and other people. They seemed determined to be solid, to be planted--to be unavoidable roadblocks in the flow of the Afterwards. They were strange beings, the people. There was nothing else like them (Sparks 17)."

These gentle follies lull the reader into a false sense of what to expect, because Sparks then brings out some serious, intense studies. In "Study for the New Fictional Science," she explores childhood isolation and peer ridicule in the form of a class schedule and assignments. The emotional details are aching, and the creative forms serve as an essential part of the story, not a distraction. Sparks doesn't shy away from anything and succeeds in making the reader both sympathetic to the character as well as shocked and uneasy.

You don't mind shop class so much. You like making things with your hands. You like using the circular saw, the protection it gives you, how it makes you feel powerful for the fourteen seconds you're sawing through a two by four. You like to picture Paul Boehler's neck pressed to the metal table, those teeth slowly driving toward his jugular. You like to picture the fountain of scarlet that will spring up and spill out, his life yours for the minute or so it takes to bleed out onto the sawdust floor.

Still, you'd be better off fashioning weapons you can take with you. The kind of weapons a hero wields. You could carry them to your locker, to your classes, to the cafeteria. You could hold them threateningly on the long bus ride home. You could demonstrate how the meek will truly inherit the fire, if not the earth (Sparks 34)."

Some of the stories even manage to combine these two sorts of examples, being both funny and shocking at the same time. Sparks writes some of her stories as odd, contemporary fairy tales and fantasies. "Cocoon," for example, is so much more than its generic description. One could truthfully summarize it as a story about elderly cannibals feasting on a children's choir (yes, you read that correctly), but written out in Sparks' style, it's grotesque and undeniably hilarious at the same time. It's not a fairy tale per se, but when put alongside the dreadful imagery presented in classic tales, it manages to serve that purpose, at least in my mind. This also presents another important aspect of Sparks' writings: in addition to her literary talent and collages of ideas, there's no doubt that she's having fun with her creations without sacrificing any value.

"The old people stand up and push their metal chairs back, hiking elastic waistbands up under their armpits and tying terry cloth bibs around their saggy necks. The children's voices grow quieter, worried-sounding. Some children forget the words to the song. The choir director is scowling at his choir; he doesn't notice the old people shuffling forward like zombies behind him. Now they have utensils, knives in their right hands and forks in their left hands. Their hair is white and flat in the back and you can see their pink scalps underneath. They are walking like monsters with wide, deliberate steps. The children all stop, except Corey Anthony, who is nearsighted and won't wear glasses in public. The cattle are lowing, he sings, and then trails off, realizing no one else is singing.

The choir director turns around, finally, but it is too late; one of the old people stabs him in the neck with a fork and blood sprays out from somewhere near his vocal cords. The children scream and try to run, but it's like a movie: the old people are slow but many, and they surround the children, coming close enough for the choir to see the brown scabs on their faces and their tiny, murderous eyes.

The children are savory and tender, more delicious than the Grand Slam breakfast at Denny's. The old people pick bits of children from between their remaining teeth and smile big, camera-ready smiles. They are as full and friendly as babies. 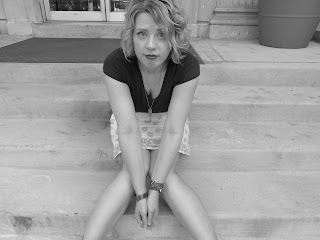 Sparks also weaves long, complex, metaphorical pieces, some that grandly go against some of the more offbeat selections. Some of these (like the title story) are more fairy-tale like than others, while some (such as the terrific "The Ghosts Eat More Air") are careful combinations of horror and family connections. A teenage girl lives in a haunted house with her father. Her aversion to the ghosts is a correlation to her aversion to her father's personality. Both notions are explicit, but they play off each other metaphorically, being singular problems as well as representations of each other. And throughout, the terror is palpable and amazingly rendered.

"The daughter wakes up screaming. She looks across the room and sees in her mirror a gaping violet-black void, and the ghosts streaming out, spinning free of it like fast winds off the desert. One of them flies too fast, and his skidding stop over her leaves a long narrow burn mark on her arm.

Don't be afraid, her father says when he comes to check on her. The ghosts like to be close to us. They feed off of our warmth. They need us.

His daughter shivers under the blankets and covers her head with her pillow. No one else has ghosts, her muffled voice says. No one else even believes in them. She massages her hurt arm.

That's why we are very, very lucky, says her father. She can't see him but she can tell his smile is pointed, rat-like; she hates him just now (Sparks 94-95)."

As I tend to say constantly, there's no need to pick a favorite in this collection, nor is it necessary to analyze every piece. The joy is in the discovery, and any initial perception I had of Sparks' writing has been confirmed and upended at the same time. I'm actually happy that I didn't read some of these pieces before, since the entire collection unfolds in so many different ways, almost novel-like. When I love a given book, I back up my assessments with examples and constructive analyses, since random praise is just as unhelpful as a critique of a poor work without constructive criticism. In this case, the citations I've given are a good start, but simply don't do justice to all of the stories combined. May We Shed These Human Bodies is a marvel, and stands as one of my favorite story collections ever. I'm already looking forward to re-reading it, and I can't wait to keep up on Sparks' future works, stories, and collections.