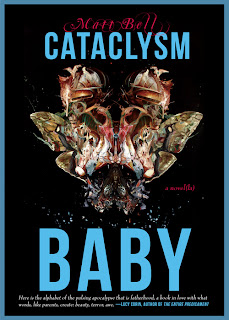 I rarely read outside reviews or synopses of the books I review, but a certain phrase led me to look over Will Kaufman's essay on Matt Bell's Cataclysm Baby. Writing for Quarterly West, Kaufman offered a piece of mild criticism in the hopes of countering his “slack-jawed endorsement-gasm.” My own mentions and analysis of Bell's writing would seemingly fall into that category. Bell's diversity and craft were on full display in How They Were Found (2010, Keyhole Press), a story collection that touched upon almost every genre, in experimental and classic styles, and I was enamored with his writing to the point of my own endorsement-gasm, recommending the work to as many people as possible. For years, Bell has published his stories in a variety of journals, amassing a varied bibliography, and now he's moving into longer published works. Cataclysm Baby, a recent offering from Mud Luscious Press's Novella series, has been receiving praise in the same fashion as his short fiction: word-of-mouth recommendations, independent reviews, and most importantly, the strength of its content.

Cataclysm Baby is divided into twenty-six chapters united by a common theme: fathers dealing with evil, mutated, and animal-like children. The time period is left intentionally vague, and there are recurring hints of plagues, biblical doom, and post-apocalyptic calamities. The chapter headings (“Ulmer, Ulric, Ursa,” “Nessa, Neve, Nevina,” etc.) form a strange, alphabetical baby name list, and I spent the first few chapters attempting to connect the names with the events, but after awhile, I realized this was unnecessary: the real focus is on the isolated fathers and their reactions to the sad, twisted offspring. The trials of parenthood have been fictionally documented in many ways, but rare is the book that features a father dealing with problems like “...our dark-eyed beauties so impossible to keep in their wicker cribs, to keep inside our rude-made gravedigger's hut, perched at the rent edge of this barren plot. See them squirm free of their cribs, their new and segmented bodies falling to the packed-dirt floor and out of this home I built for them and their mother.”


Even in the most fantastical, mythological settings, Bell manages to keep the scenarios grounded and perversely plausible. Other writers would make the mistake of attempting to top each passing chapter to the point of making this type of work a distracting collage of transgressive fiction. While different in scope and tone, the events of Cataclysm Baby work in the same vein as the stories in How They Were Found: even when dealing with the extremes, Bell's writing is focused on descriptive excellence and not a need to make the children and atmospheres outlandish. The reader becomes caught up in the suspense and gloom, but also in the bigger picture: all of the chapters hint, either explicitly or metaphorically, to much larger themes. For example, a section describing a wolf-like pack family offers this aside that not only ties into the story, but could stand alone as its own exploration of communication and togetherness:

“When the meeting is over—when the moon enters the waning that awaits it on the other side of our words—only then do we give up one language for another, to come together as one people, one troubled nation of tribes. As one mouth we combine our voices, a cacophony rising as if to crack the earth, as if to shake the heavens, as if to loose the turning moon from her mount and bring it crashing down upon us, the only mass heavy enough to bury our giant grief.” 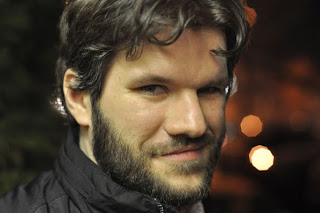 Are the twenty-six fathers and their various children supposed to be connected, or do they inhabit singular biographies? A case can be made for either, since Cataclysm Baby is composed in such a way as to lend itself to a myriad of definitions and structural possibilities. This could be one world, or it could be a mural of isolated scenes. Stretching this even further, Bell even adds sketches of dark comedy and straight-forwardness, therefore adding strains of normalcy to situations that are anything but normal. In some of these chapters and worlds, what appears to us as freakish are just ordinary happenings in the lives of the characters. What never wanes, however, is an overall atmosphere of desperate hope. Even with fragile sanity or utter perplexity with the physiques and actions of their children, the fathers strive to hold their lives together, even if this sometimes means taking drastic measures. With that, there's a sociological, universal thread that ties the reader to situations that seem to be straight out of a pure horror story.

Matt Bell continues to be an invigorating artist, exploring different forms and storytelling angles. None of his works have ever relied on gimmicks or stories without at least a handful of potential meanings, and Cataclysm Baby is no different. I've read the work twice in the last month, and even going into it that second time, I found multiple passages that seemed fresh or exposed new territories for the course of the book, offering even more ways to analyze such a slim volume. To counter my own “endoresment-gasm:” should Bell ever produce a work that stumbles in its execution, it will be easy to criticize, since his first two publications have shown what he is steadily capable of doing. However, that's a purely hypothetical scenario, and Cataclysm Baby is the latest offering from a writer who really needs more attention than he already receives.

NOTE: Recently, the publishers of Mud Luscious Press have encountered financial difficulties to the point of their next four publications being in jeopardy. Writers, readers, and other presses have started a big push to shed led on the publisher's excellent works in the hopes of helping them raise enough capital to be able to continue their book publishing. Visit the site to learn more about their available materials.
at December 21, 2012