Moving Forward: "From the Back Of the Bus" by Dick Gregory 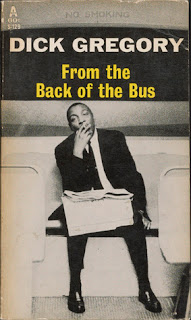 With the exception of some autographed titles and a few first editions, my book collection has little in the way of collector's items or fierce sentimental value. I'm big on margin notes, underlined passages, and freely lending books to friends with the full knowledge that it could be months until I have them returned. However, at last month's Printer's Row Lit Fest, I discovered a couple of vintage paperbacks published in the 1960s. They were encased in plastic and in pristine condition, and I spent a few weeks leaving them untouched. However, curiosity got the best of me, and my overriding belief in books being enjoyed rather than functioning as centerpieces won out. One of these titles was From the Back Of the Bus by comedian/social activist Dick Gregory.

I've been superficially familiar with his life and writings, and I was eager to read this particular work after I found it at the Lit Festival. My initial research shows that Gregory is still going strong as an activist, even with the occasional foray into conspiracy theories and sometimes outlandish ideas. The contents of From the Back Of the Bus weren't what I originally expected--the bulk of Gregory's writings are brief asides, jokes, and monologue samples, all grouped together by various subject headers (Ku Klux Klan, Miami, Hypocrisy, to give an idea of the mix). When discussing black writers, artists, and activists of the early twentieth century, the easy thing to mention is how revolutionary they were, and this is absolutely essential in regard to Gregory's work. He uses his humor to break barriers, but the overall atmosphere is one of an upfront challenge to the white audiences of the time. He mixes social commentary and says what a lot of people were likely thinking at the time, from both sides of the racial divide. The idea of comedic revolutions, especially in such a social context, is literally awesome, and considering the books publication in 1962, one can only imagine how shocking and ahead of the curve it really was. This is a fascinating artifact from the beginning of the Civil Rights decade. 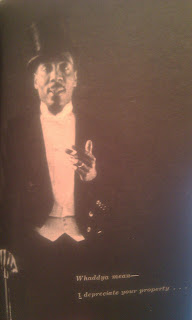 The longest passage in the book is the introduction by Playboy founder Hugh Hefner, who gave Gregory his first break as a regular comedian at Chicago's Playboy Club. For all of Hefner's own criticisms and facets (spearheading the sexual revolution vs. Playboy continually objectifying women), he deserves credit for his early promotion of Gregory's material. Years ago, I remember a moving tribute from Gregory during the Comedy Central Roast of Hugh Hefner. In the midst of constant, tiring jokes about Hefner's age and sexual proclivity, Gregory moved him to tears by thanking him for giving him the chance and, most importantly, not censoring or asking him to tone down his material. As Hefner boldly states in his introduction:

"But more than this, Gregory has added a new dimension to the world of comedy. He is a black funnyman who does not get his laughs by fearing ghosts in B movies, rattling 'dem bones' or other such demeaning antics. He is another much-needed spokesman for his people, one who can reach the ear of the world in a way that makes it listen (18)."

This idea is important, especially in context. From a 1960s standpoint, one of the most vivid examples of breaking racial barriers in comedy was the banter between Sammy Davis, Jr. and the rest of the Rat Pack. According to writer Bill Zehme, the comedy, which was composed of seemingly racist jabs, was a way of calling attention to stupidity with stupidity. I find the Rat Pack comedy to be vastly overrated, and while Zehme has his points, I feel that Gregory's work was a much more authentic, real way of dealing with the views of that given era. From the Back Of the Bus isn't a work that lends itself to a capital-R "Review," but some of Gregory's passages are still very fresh and vivid fifty years later. 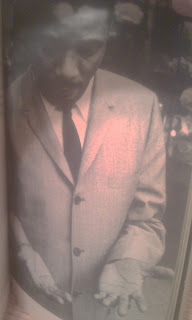 "Just for laughs, I've been thinking about buying one of those army rocket belts. You saw it in the papers--where you can jump fifteen feet up and land 120 feet away. Gonna take it down to Birmingham and tease Hell outta lynch mobs (Gregory 29)."

"All the record stores are playing that subversive song again...I'm Dreaming Of a White Christmas...It's kinda sad, but my little girl doesn't believe in Santa Claus. She sees that white cat with the whiskers--and even at two years old, she knows damn well ain't no white man coming into our neighborhood at midnight...be honest now. How many of you have ever seen a black Santa Claus? He ain't even black after he comes down the chimney--and he should be!...(Gregory 38)."

"You gotta realize, my people have never known what job security is. For instance, comes another recession and the economy has to tighten its belt--who do you think's gonna be the first notch (Gregory 59)?"

"I'm really kidding. Florida happens to be one of the most liberal states in the South. Why I can go to any place I like--restaurants, nightclubs, theaters--and I only have to do one thing. Change my name to Ricardo (Gregory 89)." 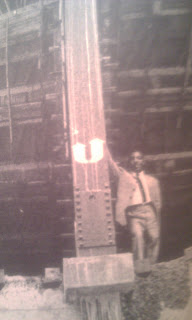 While I'm sure From the Back Of the Bus has its own following and has received its own attention despite the fact that I'm new to its existence, I was also fascinated by its combination of text and photography. The photos are the work of Jerry Yulsman, and the images tie very carefully into Dick Gregory's texts. These are not random images, but rather carefully constructed placements that give the work a layered, multimedia atmosphere. The images I've included, combined with the texts and captions, are a combination of mild humor and intense juxtapositions. The above image of Gregory in a fancy tuxedo and top hat, accompanied with the remark "Whaddya mean--I depreciate your property..." is still striking and yet again takes on increased significance with its era. It's impossible to tell whether these images are more from the imagination of Gregory or Yulsman, but I can imagine the two men sharing ideas of how to place the man in context with his surroundings, and, in effect, place his ideas within a then-contemporary context. My favorite image is the last one included, featuring a suited Gregory standing in a building that is either under construction or hollowed out from neglect. The connotations take on so many meanings, reflecting success in the face of failure, as well as Gregory's own journey of personal success and early substandard living. Yulsman's photos are not just random accompaniments; his closeups and long shots of Gregory are stunning, unheralded examples of striking photographic art, challenging stereotypes as well as engaging in hip, self-aware conversations about black consciousness and the still-ongoing struggles of race in America.

In some cases, these assessments would be a stretch, but in today's world, there is still a struggle with bigotry and reflections on race relations. While Gregory's words and Yulsman's photographs are still meaningful today, I feel the importance comes from placing them in their original context. While America still has a long way to go with its race dialogues, it's stunning to see these groundbreaking works of art and realize how they shook up and subverted the mindset of the 1960s world. In short, and without any hyperbole, From the Back Of the Bus still maintains its groundbreaking emotions, and I'm hoping it eventually finds its way back in print, not only because of its sociological weight, but also because of its terrific comedy and willingness to start dialogues that are still needed.

"On the other hand, if you've liked the book--don't tell you friends. Just take me to lunch when it's not Brotherhood Week (Gregory 125)."

Work Cited:
Gregory, Dick. From the Back Of the Bus. Copyright 1962 by Dick Gregory Enterprises, Inc. Photography by Jerry Yulsman.

I owned that book and read it over and over! Funny but biting.