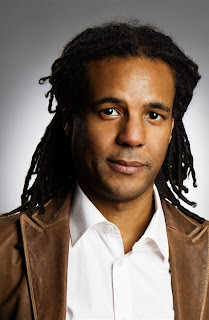 Whenever I read books by a new author (new in terms of my readings, not recent debuts), it's rare that I start at the very beginning. Last year, a close friend of mine was very excited about the publication of Colson Whitehead's Sag Harbor, and in talking to me about his canon, gave me an excellent endorsement of Whitehead's 1999 debut novel The Intuitionist. Like any good word-of-mouth description, my friend's synopsis was an excellent sketch, but left so much more to be discovered. The author's name has been in my head and in my notes for quite some time, and I mention the early recommendation to give credit where it's due. Given Whitehead's literary esteem, I would have started reading his works eventually, but perhaps those readings would have been delayed without my friend's enthusiasm. After reading an enjoyable interview between Whitehead and Rob Spillman in the 10th Anniversary issue of Tin House magazine, I decided to not wait any longer.

The Intuitionist details the politics and conspiracies of two vastly different groups of elevator inspectors in an unnamed city (if not New York, then crafted as such), in an unnamed time (this is more vague, but the descriptions have the aura of the post-World War II era). The Empiricist inspect elevators with standard, by-the-book methods; The Intuitionists use emotions, intuition, and deep meditation in their inspections. As the book hints, the Intuitionists have a higher accuracy rate, but are still looked down upon by the Empiricists. Lila Mae Watson is the first black female Intuitionist in the department, and her demeanor and devotion to her job suggests nothing metaphysical or out of the ordinary. However, a glimpse into her mind as she inspects an elevator shows the curious, tangible thought process that goes into such a mental form of inspection.

"Everyone has their own set of genies. Depends on how your brain works. Lila Mae has always had a thing for geometric forms. As the elevator reaches the fifth floor landing, an orange octagon cartwheels into her mind's frame. It hops up and down, incongruous with the annular aggression of the red spike. Cubes and parallelograms emerge around the eighth floor, but they're satisfied with half-hearted little jigs and don't disrupt the proceedings like the mischievous orange octagons (Whitehead 6)."

An elevator inspected by Lila Mae crashes, leading to immediate backlash against the Intuitionist faction, especially since it's an election year for the Elevator Guild. Lila Mae knows that she inspected the elevator properly, leading to the immediate assumption that the faulty elevator was sabotaged. Her apartment is broken into and searched, and she has to go into brief hiding in an Intuitionist safe house. The intention of clearing her name eventually turns into several different mysteries, including the search for notes and blueprints regarding the "black box," a theoretically "perfect" elevator designed by the late James Fulton, the founder of the Intuitionist movement. Lila Mae seems to take every new turn in stride, since her makeup suggests a woman not easily shocked or broken down. As Whitehead says in his interview with Spillman:

"With The Intuitionist I am confined by the character of the book and [Lila] Mae's disposition--she's sour and repressed, so she's not going to be cracking a lot of jokes."

This disposition is understandable. Despite being completely professional, intelligent, and a valued elevator inspector, Lila Mae experiences a lot of discrimination. She's the first black female Intuitionist, thereby representing three minorities in the scope of the novel. Whether blatant or implied, she can't seem to escape even the most mild criticisms or racial implications.

"'I think I remember you,' Mrs. Rogers says flatly, nodding her head. 'There never been too many of us around here, who weren't scrubbing floors or picking up, that is. Yes, I remember you. I remember you because you were the only colored gal around here who didn't work here (Whitehead 92)." 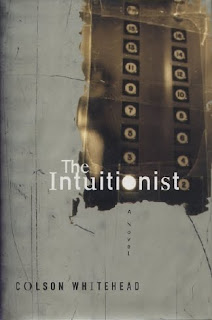 The above quote is a hint to the suggested time period, with the adjective "colored" being used frequently. The Intuitionist is partly historical, with the slightest dash of science fiction, but is at heart a novel about race relations. A reader would not be faulted for thinking that, if Lila Mae were a white male, the vast majority of her problems would be minimized. She's not the only one dealing with racism. Pompey, the only other black Intuitionist, has internalized the racism, and it manifests itself in downright ludicrous thoughts.

"No caramel soda, no prune juice, and definitely no coffee: Pompey won't drink anything darker than his skin, for fear of becoming darker than he already is. As if his skin were a stain that could worsen, steep and saturate into Hell's Black (Whitehead 87)."

The politics of the Elevator Guild are also race-driven, with the leaders putting up the front of being supportive of the black community when they're anything but. In the search for the "black box," Chancre, the Empiricist Guild leader, makes his beliefs explicit to Lila Mae. In this quote, Whitehead could very well be encapsulating the negative history of American politics and race relations:

"Chancre pauses a moment, savoring, responds: 'Do your job. Serve the Department. Reed's got you running around looking for Fulton's little box--well, if you happen to find it, you give it to us. What good is it going to do them in the long run? They may sway some of the undecideds, but the Empricists have always been the party of the Elevator Inspectors Guild, and always will be. You believe what they tell you and think that Lever [an Intuitionist] and them are 'friends of the colored people' or some such, but they're the same as anyone else (Whitehead 115-116).'"

While greatly different in style and subject matter, The Intuitionist reminded me of Jonathan Lethem's Gun, With Occasional Music. In both novels, the writers created distinct mashings of genres and time, all housed in the style of standard mystery novels. However, the mystery aspect of the books is intended to be a compliment rather than the main plot. Both Whithead and Lethem are scholars of media and pop culture, and in the midst of originality provide great homages to past writers in a variety of genres. Lethem was obviously inspired by the mysteries of Raymond Chandler; in Lila Mae Watson, Whitehead creates a woman who would be very much at home in a private eye story, not blinking at each new turn. Despite her lack of explicit confrontations, she doesn't accept any discrimination. She's mentally superior to the people who look down on her.

The elevator metaphors are obvious in The Intuitionist, the notions of rising and falling, especially in relation to black American history. However, Whitehead doesn't rely solely on these metaphors. Much like the fiction of Nella Larsen, the fictionalized friction isn't different from reality.

Work Cited:
Whitehead, Colson. The Intuitionist. Copyright 1999 by Colson Whitehead.
at May 14, 2010