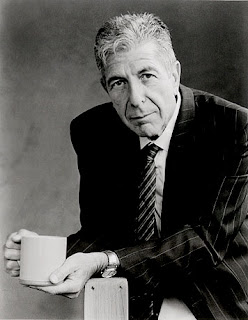 It's probably not a stretch to say that, for a band or a solo musician, if the music is described as "poetic," a major compliment has been paid. Taking lyrics by themselves, one can point to Andrew Bird or John Darnielle as being songwriters who create lyrics that can easily stand alone on a printed page as a poem. Some artists can equally wear both hats: for example, Jeff Tweedy published a poetry collection, Adult Head, in 2004, and Saul Williams is arguably the master of poetry jams infused with hip-hop and street culture. Of course, the line between writing poetry and writing music can be very blurry. In one of my college poetry courses, my classmates and I were instructed to lecture a class period on the poetry collection of our choosing. The professor was quick to stress that lyric books by musicians did not count, since the words weren't originally intended to be poems. All of these combinations, definitions, and blurred lines take on even more significance with Leonard Cohen. Not only has he been writing and performing longer than anyone else I've mentioned in this paragraph, but his tendency of being classified as either a poet or a songwriter is usually very specific, depending on the medium. I've long been an admirer of his music, but until my reading of 2006's Book Of Longing, I haven't read any of his poetry. This is probably odd, since most fans of his music have probably familiarized themselves with his written works, especially given that he's about as equally prolific in both mediums.

Given Cohen's mastery of language and the complexities of the majority of his songs, his poetry, even in longer forms, is strikingly minimalistic. Rarely is anything embellished in his words, and even with multiple examples of linguistic cunning and beautiful wordplay, he lets his themes do most of the talking, so to speak. Since so much has been made of Cohen, be it analyses or near-universal praise, it's unlikely that I've gained anything from his latest collection that hasn't been felt before. Even my introductory paragraph can be dismissed in the face of his poem "Titles." Of course, even in poetry, it's dangerous to confuse the writer and the subject; however, in this piece, one can't help but feel that Cohen's exasperated by the many names and designations that he's been given, and the overall feeling is that 'artist' or 'human being' would suit him just fine.

"I had the title Poet
and maybe I was one
for awhile
Also the title Singer
was kindly accorded me
even though
I could barely carry a tune...(Cohen 159)." 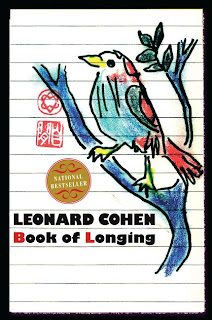 Love and sex are nearly constant shadows in his writings, if they're not the foremost subjects. Past loves and erotic encounters are the focus, but Cohen renders them as happenings, taking the good with the bad, and even pieces that are heavy on sadness seem to break through to reveal the old adage that "it's better to have loved and lost than to have never loved at all." Of course, great writing can morph a cliche into an original statement. "The Remote," in all of its brevity, creates a scene of intense longing juxtaposed with a small moment of everyday life:

Cohen's shortest poems work like the literary equivalent of drive-by shootings. They come, they hit their targets, and they move on to the next assignment. But what strikes me the most is his use of rhymes. One of the first things we learn in grade school poetry studies is that poems don't have to rhyme. However, in my readings in Book Of Longing, I found that Cohen's rhyming stanzas seem to add another dimension to the overall emotion. Without being a distraction, it's as if he's attempting to write textbook poems, but knowing that the content far outweighs the musical meters of the lines.

"You Have Loved Enough"

"I said I'd be your lover.
You laughed at what I said.
I lost my job forever.
I was counted with the dead.

I swept the marble chambers,
But you sent me down below.
You kept me from believing
Until you let me know...(55)"

Book Of Longing is also filled with Cohen's sketches, some of which merely compliment a given poem, and some of which work as poems themselves. There's an undeniable beauty in them, but also, as the below example suggests, a sort of intentional ugliness, not so much caricature, but drawn more for emotional relevance than reality or any outlandish definition. For me, the images worked to create a feeling that I was looking at someone's personal journal instead of a published book. The words and images are meticulous in their placement, but given the randomness and the aforementioned brevity, readers have an excellent example of Cohen's creative progress. 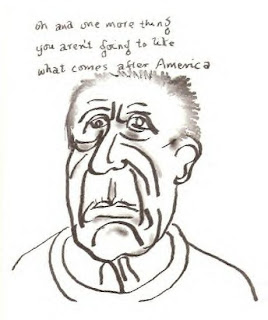 This is what makes Book Of Longing a compelling, satisfying archive. The pieces are definitely autobiographical, spanning a wide range of feelings and eras in Cohen's life (loves, travels, and his stay at a Zen monastery in California). Despite this range, the undeniable understanding is that every page is marked by authenticity. Cohen is the consummate artist. Much has been made about his five year stay at the monastery, and it was a journey that few people would have the mindset to make. In closing with the idea of authenticity (or, more appropriately, honesty), the poem "The Lovesick Monk" is a wonderful combination of time and mind, acknowledging his place but at the same time being human about it.